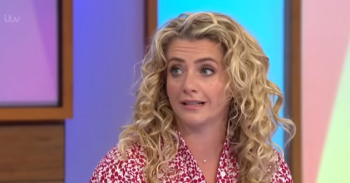 The actor is only 17 in real life

The actress, who plays gaslighter Maya Stepney, shielded probing questions from the panel with Stacey Solomon suggesting the plot has received so much backlash because actor Joe-Warren Plant is only 17.

During a live discussion about the controversial relationship between schoolteacher Maya and her student Jacob Gallagher, played by Joe-Warren, Louisa insisted that the young teenage actor is surrounded by chaperones and his “Emmerdale family”.

Talking about the ITV soap, and upcoming episodes in which Maya is set to be exposed, Louisa said: “Joe-Warren’s been on the show since he was eight years old, he’s grown up on the show.

“He has a family on the show that love him and look after him. He’s incredibly mature and professional as an actor, and we all look after him and he looks after us.”

Louisa added that the actor is mature for his age, and said: “He is 17. He is very mature and we all look after him. It’s a job, that’s what we do as actors.

“It’s as awkward when it’s someone your own age as it is with someone younger.”

However, Stacey mentioned that many fans were horrified because the actor was just a year older than the ‘victim’ in the soap.

Stacey said: “It’s almost like a real-life play out because of the actor’s age. Any actor, of any age, had they looked young enough, could have played that part. But Joe-Warren is so young [in real life].”

But Louisa defended the soap’s decision to use Joe-Warren, replying: “Because he’s been on the show since he was eight, that’s the story they’d put for his character, so they couldn’t change that as such. But he’s always got chaperones around.

“We’ve tried to stay away from as much physical stuff on screen as much as possible because we don’t want to make it titillating and raunchy, that’s not the story we’re telling.

“It’s about the manipulation and suggestion of what she’s doing to him.”

Louisa, 40, also admitted she’d had a mixed reaction to the storyline, but explained that the plot had helped people.

She said: “I have received really lovely messages from people, telling me the storyline is helping them.

“They have been in similar situations, what was a lovely relationship was actually them being groomed.”

She also reminded viewers that the ITV soap has been working closely with Barnardo’s, and expressed her admiration for social workers who go “above and beyond the call of duty”.

Do you agree with actor Joe-Warren kissing a much older woman on set? Leave us a comment on our Facebook page @EntertainmentDailyFix and let us know what you think!