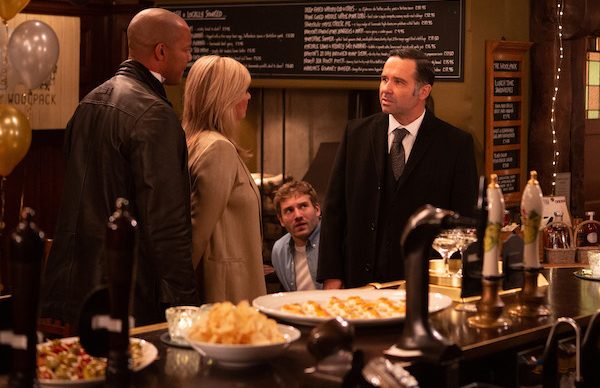 Emmerdale fans in shock to discover Graham and Kim are married

On Tuesday evening (November 26), superwitch Kim left the villagers – and those watching from home – in shock when she revealed she had been married to Graham all this time.

Out to destroy her formerly loyal sidekick, Kim decided to expose the fact that they are married in the most malicious way ever – by throwing a belated wedding party and inviting all her employees.

And his jaw dropped when he arrived at the Woolpack and realised why Kim had thrown a party – to celebrate their anniversary!

As Kim dropped the bombshell that she and Graham married as a ‘business arrangement’, poor Rhona was seething as she struggled to get her head around the revelation.

When a humiliated Rhona rushed out, Graham followed and insisted it was a business arrangement so he could control her assets while she was in prison.

Graham married to Kim?! Now that is a twist.

But when a devastated Rhona ended their relationship, a furious Graham took his revenge out on Kim in the best way.

Rigid with rage, Graham spat out that Kim is NOT Millie’s grandmother at all, and that HE is Millie’s biological father, not her son Jamie.

He snapped: “Flesh and blood. It means so much to you doesn’t it, Kim?

“You want tragic, how about the rich old lady not knowing her precious little granddaughter isn’t really her own flesh and blood. Your poor stupid son doesn’t know either and you’d grown so close to her, haven’t you?

“But Millie isn’t Jamie’s daughter, she’s mine. The apple of my eye, happy anniversary.”

Fans were in total shock that the pair were married, and many more were thrilled that Graham had “wiped the smirk off Kim’s smug face”.

Writing on Twitter, one said: “Graham married to Kim?! Now that is a twist #Emmerdale.”

Another said: “I was not expecting this tonight! Kim and Graham are married! I know the jungle is not on until 9pm but we are about to witness a rumble in the jungle here.”

A third added: “Oh good grief, that was quite a twist! Graham and Kim being married albeit one of convenience. What are they doing to Graham?”

Oh good grief that was quite a twist! Graham & Kim being married albeit one of convenience. What are they doing to Graham? He hasn’t told Rhona & WHY didn’t they allow him to reveal his secret of being Millie’s Dad at the party to show Kim back up? #emmerdale ⁦@emmerdale⁩

I was not epxecting this tonight! kim&graham are married! i no the jungle is not on till 9pm but we are about to witness a rumble in the jungle here

“WTF was that?” asked another. “Kim and Graham got married! I’m shooketh!”

Many others were thrilled that Graham has revealed Millie’s paternity, with one tweeting: “Yessss Graham… That wiped the smile off Kim’s face… Happy anniversary!”

Another said: “One all to Graham.”

A third added: “I laughed at the end tonight, Kim was lost for words, good on you Graham!”

Fans loved the episode, with some saying the soap was back on form, calling the scenes “awesome” and “fabulous”.

Next week, Graham prepares to leave Home Farm – but are the pair about to embark on the mother of all divorce battles?

Are you Team Graham or Team Kim? Leave us a comment on our Facebook page @EntertainmentDailyFix and let us know what you think!