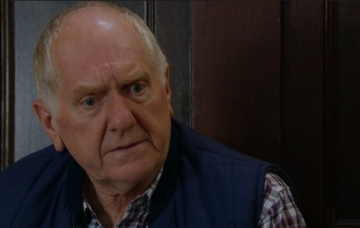 Duncan Preston, who plays Doug Potts in Emmerdale has quit the soap and his character’s final appearance is set to be shown this week.

Emmerdale confirmed to the publication that Duncan is leaving the soap, and there are “no plans” for his return.

Currently Doug is in Australia with daughter Laurel and her stepdaughter Gabby, son Arthur, and daughter Dotty.

The family will be returning this week.

Doug will come back with monumental news for Laurel and previews on the ITV website have revealed he tells girlfriend Brenda he’s moving to Australia.

He says it will be the end of their relationship if he does leave.

However, Arthur overhears the news and feels betrayed by his grandad.

How will Laurel cope with the fact her father is leaving?

In 2018, Doug was left devastated when his friend Gerry Roberts was killed in the Grange B&B.

Gerry was killed by Lachlan White, who viewers knew was a serial killer.

Read More: Emmerdale fans beg bosses to give Kim Tate a worthy enemy instead of wasting her

After knocking down a support column in the hope of killing Gerry, Lachlan was disappointed to find his former cellmate had survived.

Lachlan then went on to drop a brick on Gerry’s head which did kill him.

Doug believed he was repsonsible for the teenager’s death, however it was later revealed Lachlan had purposely killed Gerry.

What are some of your favourite Doug Potts moments? Leave us a comment on our Facebook page @EntertainmentDailyFix and let us know what you think!