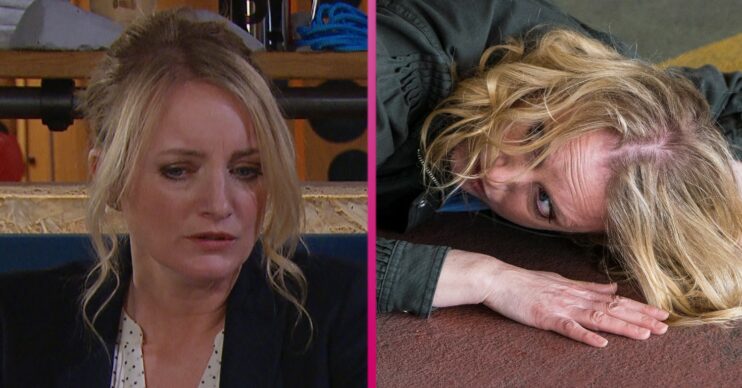 Nicola was attacked by a group of girls

Nicola was viciously attacked by a group of teenage girls.

However fans think that Nicola may know one of the girls.

Read more: Emmerdale: Does Nicola die after being attacked?

In last night’s episode, Nicola, Bernice and Laurel all went out to a bar.

Nicola made the decision to leave the bar, but on her way back to her car she ran into some girls.

One of them asked Nicola if she had any alcohol and things quickly escalated.

Nicola and the girls started to get into a verbal argument when she was approached by more girls.

They took Nicola’s bag, went through her wallet, ripped up a picture of Nicola’s children and looked at her driver’s licence.

The girls went on to smash Nicola’s phone and threw her keys.

Nicola went back to her car but one of the girls pushed her over and began kicking her.

However in the background another person with their hood up could be seen watching the attack.

Viewers have a shock theory about Nicola’s attack

After Nicola was beat up, a girl in white and gold trainers came up to Nicola and apologised before running off.

But was that the person who was watching the attack?

Some fans believe that Nicola might know the person who apologised to her could be connected to Nicola somehow, or is someone we’ve seen before.

A few even think Nicola will recognise the shoes on someone she knows.

It was very well done, but I have a feeling we know the girl at the end that said sorry …

Do you have any theories?

Read more: Who is in the cast of Emmerdale 2022? Meet this year’s full line up?