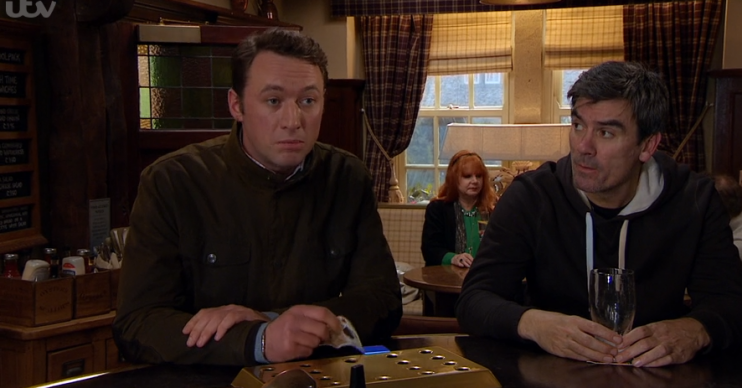 Liam and Cain haven't had many scenes together

Viewers of Emmerdale have called for more scenes with Cain Dingle and Liam Cavanagh after their hilarious interaction in last night’s episode of the soap (January 6 2020).

In the half an hour episode, Gabby tried to get Liam to go out to Australia to win Bernice back after cheating on her with Leyla.

Liam told Leyla, who likes him, that he also had feelings for her, but he wanted to make things work with Bernice.

Liam tried to send his ex-fiancé an email, but with the pressure from daughter Leanna and Bernice’s daughter Gabby, he struggled and went to the pub.

Sitting next to Cain, he offered to buy him a drink and started to say he had a difficult day.

Liam and Cain are the duo I never knew I needed.

Cain replied: “Do you need to talk about it? ‘Cause if you do then just skip the pint.”

Liam got a text from Bernice and he opened up to Cain that he and Bernice had split.

Bernice’s sister Nicola then came in and asked him if he was going to tell Cain why, to which Cain replied: “I don’t care.”

But Nicola ignored Cain and told him Liam had been “sniffing around Leyla.”

The doctor defended himself saying it was a one-off kiss before leaving to get some air.

Viewers loved the short interaction between the pair and want to see them become better friends.

Right who's up for Cain and Liam as a bromance! 😄😄#Emmerdale

Cain and Liam…Actually love them together #Emmerdale

Unlikely friendship I want to form Liam and Cain. #emmerdale

Fans of the soap know Bernice left to go to Australia days before her wedding to Liam as her ex-husband Charlie, father of her daughter Dee Dee, had been in a car accident and was in a critical condition.

Knowing she couldn’t let her teenage daughter go home to look after her dad alone, Bernice opted to go with her to help.

But before Christmas she broke the news to Liam that she wasn’t coming back for quite some time.

He ended up kissing Leyla and confessed to Bernice, but will she ever forgive him?