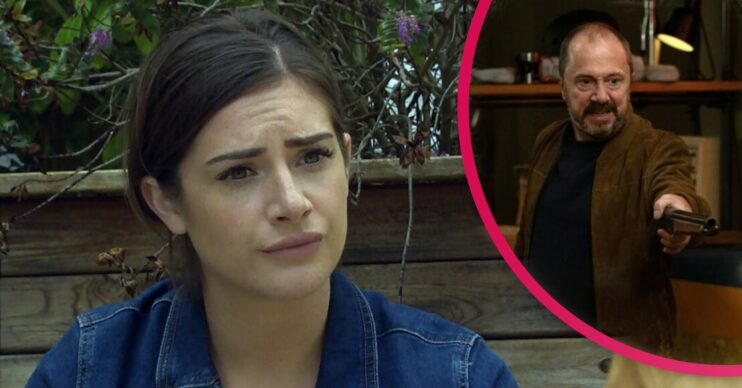 Emmerdale SPOILERS: Victoria shot during hostage horror at the HOP?

Next week’s Emmerdale spoilers reveal that Victoria is in mortal danger when crazed Russ takes her and Wendy hostage.

The gun-totting criminal is determined to get his hands on grandson Harry’s 50k inheritance and he won’t let Vic stop him.

It’s only after terrified Wendy reveals the truth about her violent ex that the situation turns violent.

But after taking the women hostage to the HOP, who will Russ shoot?

It’s been a living nightmare for Wendy to lie to Victoria about Russ’ real intentions.

But when she finds out he’s on the run because he shot a policeman during an armed robbery, she’s petrified.

He orders her to convince Victoria to hand over the money, or he’ll use the sawn-off shotgun he’s hiding in his car boot.

Although Wendy initially does what he demands, she’s disgusted with herself and decide to come clean.

Vic can’t believe it when Wendy reveals the truth about Russ and that he’s in possession of a secret that could wreck his ex-wife’s life.

But before Wendy can divulge the details of what she’s hiding, Russ turns up, and he’s armed.

It doesn’t take long for Russ to realise that Wendy’s destroyed his web of lies.

So, instead of playing nice with Vic, he pulls out his gun.

Pointing at Victoria, Russ orders her to make the bank transfer, or she’ll never see her son again.

It looks like Vic’s got no choice, but outside armed police are gathering to bring Russ in.

Their presence escalates the dangerous standoff further, and Russ looks set to claim lives if he can’t get what he wants.

Outside, frantic Bob, Jacob and Dan are praying that the police bring Russ in without fatalities.

But when a shot rings out, it looks like a well-loved Emmerdale resident could be fighting for their life.

Who has taken a bullet, and will they pull through?