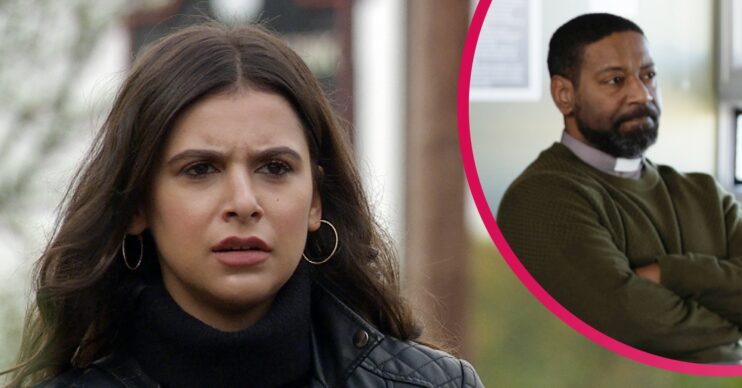 Emmerdale SPOILERS: Is this the end of Meena’s storyline? What happens next

Emmerdale character Meena Jutla was charged with all of her crimes in tonight’s episode (Tuesday, February 22), but is this end of her storyline?

In last night’s scenes (Monday, February 21) Liam and Leyla found Meena’s trinket box. Realising the items in the box were connected to her crimes, they took it to the police.

Tonight DS Rogers questioned Meena and she continued to deny anything to do with Leanna or Andrea’s deaths.

He also said forensics showed Leanna’s DNA was all over Meena’s box and the newspaper clipping about Nadine, meaning Leanna must have found it before she died.

Soon he charged Meena with the murders of Leanna Cavanagh, Andrea Tate and Ben Tucker, but that wasn’t all.

To add to all those accusations, Meena was also charged with assaulting Harriet Finch.

But what’s next for Meena now she faces court?

Emmerdale SPOILERS: What’s next for Meena?

After Meena made a call to Charles, he begins visiting her.

Aware Meena’s plea hearing is coming up, Charles realises that he needs to move on with his plan to crack Meena’s confession.

At the prison, Charles presses Meena for her confession and is caught off guard when she admits to killing Andrea.

Charles struggles to hold it together as Meena spills every painful detail about Andrea’s murder.

Back at the church, Charles is tortured by his meeting with Meena but after some wise words from Harriet, he decides to hold a support group to help those whose lives were affected by Meena’s actions.

Charles is encourages when Liam immediately agrees to participate.

The next day, over the phone Charles refuses to see Meena again, deciding to put the congregation first.

Meena is furious and bashes the phone receiver against the prison wall, knowing her plan to manipulate Charles has been foiled.

Will she find a different way to get to him?

Read more: Who is Victoria Sugden in Emmerdale? How old is she?