Marlon and Jessie's marriage has hardly been plain sailing since the couple tied the knot in Emmerdale last year.

Within that time her ex-con son Billy arrived in the village, Ellis was stabbed, little April was put in danger, Jessie quit her job without consulting her husband... to name but a few hiccups.

Now her ex Al has rocked up in the village and, next week, the mum of two's head is turned by him. 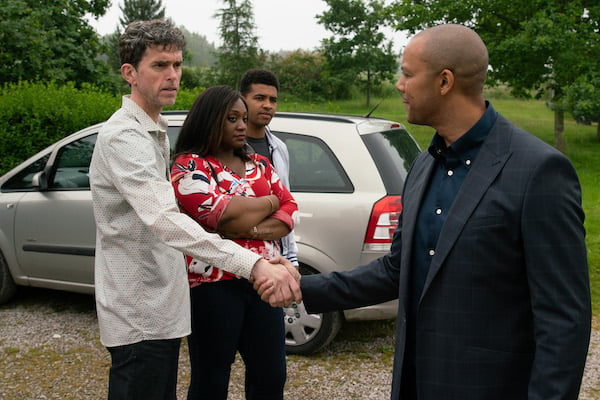 Marlon is understandably uneasy with Al in the village (Credit: ITV)

She's surprised when he mentions a headteacher's job in Dubai... and reveals he's already set up a phone interview.

He then 'accidentally' lets slip details about it to Marlon, knowing Jessie hasn't told him about it.

Marlon arrives home to catch Jessie mid-interview and storms off.

Later, Al and Jessie reminisce about the old days and he moves in for a kiss. She rebuffs him but when he tries again later she briefly succumbs.

Suddenly someone bursts through the door... Mandy! Will she tell Marlon he's being cheated on?

Caught in the act (Credit: ITV)

Fans of the soap know that actress Sandra Marvin, who plays Jessie, is leaving.

I've had the most amazing time on @emmerdale with some incredible people.

She said last month: "So it's out... I'm leaving the lovely Dales, and will be joining the fabulous @TheThunderGirls this September.

"I've had the most amazing time on @emmerdale with some incredible people. Also thank you to all the #Emmerdale fans for you support! You really are the best!"

Could this be the beginning of the exit plot, with Marlon at the centre of yet another failed relationship?

Leave us a comment on our Facebook page @EntertainmentDailyFix and let us know what you think of this plot!