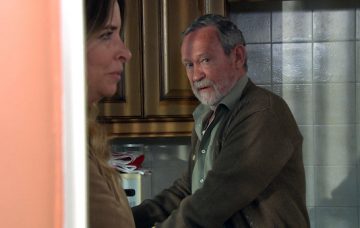 He kicked her out when she was a teen

Charity Dingle might have put DI Bails’ trial behind her but the guilty verdict and the sick rapist being sentenced to 30 years in prison has opened a whole new can of worms.

Charity is firmly in self-destruct mode and is trying hard to push her family away, blaming them for not doing anything when her dad threw her out as a teen.

Her dad Obadiah, was furious when Charity got pregnant aged just 13 and gave birth to baby Debbie.

After taking the baby from her and giving her away, he threw his own daughter out onto the streets, forcing Charity to sell herself to make enough money to survive.

It was during this period of her life that she met up with Mark Bails who was a police officer at the time.

She thought he liked her and was pleased when he offered her a place to stay.

But her dream soon turned into a nightmare when Bails locked her in the flat and subjected her to regular beatings and rapes.

Charity revealed that he even brought some of copper friends round to have sex with her too.

Next week Charity well tell her family that she wants to see Obadiah and Zak will confess to Chas that he knows where he is.

As Charity prepares to meet him, she’s nervous.

Will the meeting go well or will she regret letting him back into her life?

Fans have been worried about Charity, even though Bails finally got what he deserved in scenes that aired last week.

Despite her victory, she seemed really down.

Should Charity let sleeping dogs lie? Leave us a comment on our Facebook page @EntertainmentDailyFix and let us know what you think!