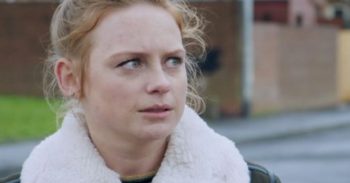 Her future in the Dales hangs in the balance

Emmerdale’s Amy Wyatt makes a big decision about her future next week after being given fresh hope in the fight for her son.

Determined to keep Kyle away from Cain, Kerry tracked Amy down in Ireland and begged her to come home.

Amy returned, but it wasn’t exactly a happy homecoming when Faith called the police knowing Amy was wanted for kidnap.

The returnee was arrested after she had tried to abduct Kyle from his adoptive grandmother Joanie when Amy was last seen in the Dales.

Amy was released pending further enquiries and Eric Pollard, the only other witness, changed his statement to protect the girl who’s like a daughter to him, and so it looks like the charges will be dropped altogether.

After tackling Cain for visitation rights, Amy told him she didn’t want to take her son away, she just wanted to be able to see him.

With the Dingles dead against her having anything to do with Kyle, Amy ended up looking after him on Thursday March 14 when no one else was available.

And next week it seems she’s made quite an impression on her little boy when he starts asking after her.

Kerry passes the news onto Amy and although she tries not to get carried away over it, she’s secretly delighted that her son wants to spend more time with her.

It leads to her making a big decision over her future – and she decides to stay put in the village a little while longer to develop their bond and forge a relationship with Kyle.

Kerry is utterly thrilled with the news her lass plans to stay, but will she stick around on a more permanent basis?

Read more: Emmerdale’s Graham finally confesses who killed Joe – or does he?

Natalie Ann Jamieson has taken over the role of returning Amy from Chelsea Halfpenny who played her between 2010 and 2013.

At the time of the recast, she told The Sun Online “I’m incredibly excited to meet all of the talented cast and crew at ITV’s Emmerdale.

“I feel very lucky to be joining the cast of such a loved and respected show.

“I’m very grateful for this opportunity and can’t wait to find out what the future holds for Amy!”

Emmerdale is on Monday to Thursday at 7pm with an extra episode on Thursday at 8pm on ITV.

Are you glad Amy’s sticking around in the village? Leave us a comment on our Facebook page @EntertainmentDailyFix and let us know what you think!