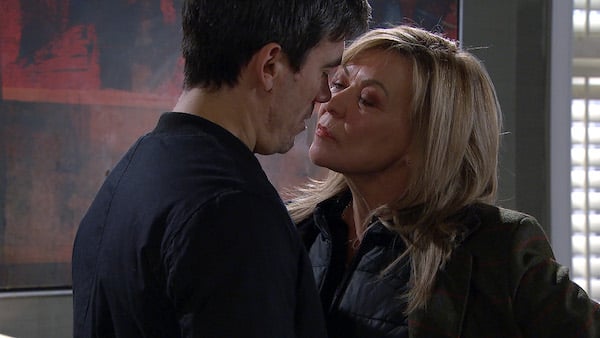 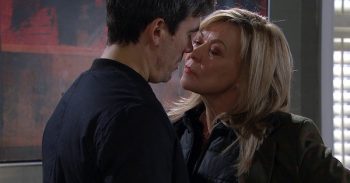 Kim Tate’s game-playing gets underway next week when she tries it on with Cain Dingle, but will her seduction plan work?

Ever since she arrived back in the village, Kim Tate has had it in for Cain. But next week sees her plan to ruin his life step up a gear as she turns on the charm and tries to seduce him.

When Kim turns up at Butler’s Farm next week to talk to Moira, she is shocked to find she has met her match in feistiness.

Kim offers Moira money for the farm, and when Moira point blank refuses to sell, Kim is fuming – only for things to get even worse when she falls over into the mud!

Everyone knows that an angry and humiliated Kim Tate is not someone to be crossed, and when Cain hears about Moira’s standoff with Kim, he is left worried where this will leave him.

But Kim and Moira’s feud doesn’t end there. Kim’s nose is put out of joint once again when she offers the vets a contract with her equestrian centre, and they instantly turn her down.

Knowing that Moira was involved in their decision, Kim realises this is war and sets about making Cain’s life a misery to get back at Moira.

After the women have a stand off in the Woolpack, Kim decides to hit Moira were it hurts and sets about seducing Cain… and when he comes to Home Farm to see her, she jumps at the chance to turn on the charm.

As Kim pulls out all the stops, she is thrown when Cain calls her bluff… but as she goes to kiss him, he knocks her back, leaving her fuming and vowing revenge.

Later Kim tells Graham that she is going to pull Cain’s life apart bit-by-bit… and that she intends to use Noah as bait in her games.

Graham’s left worried about just how far she is planning to go to show the Dingles who is boss… is she playing with fire?

It looks like this game Kim’s playing is going to end in tears. But whose?

Do you think Kim has met her match in Moira? Leave us a comment on our Facebook page @EntertainmentDailyFix and let us know what you think!