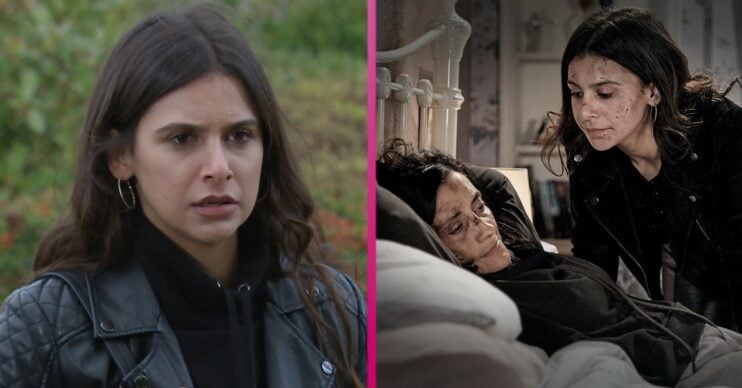 Emmerdale: Meena to stage a suicide and let sister Manpreet take the blame for her crimes?

Will she murder Manpreet but make it look as though she took her own life?

Emmerdale character Meena confessed to Manpreet that she killed four people, but is she going to kill her sister?

Meena is currently holding Manpreet hostage in her own room after discovering she remembers everything that happened before the Woolpack explosion.

Meena explained how Leanna should’ve kept her nose out of her business and that Andrea saw her trying to drown Vic in the waterfall.

She also revealed Ben found footage of her trying to kill Vic so she had to kill him too.

Manpreet looked both terrified and shocked as her sister proudly admitted her crimes.

Feeling brave, Manpreet taunted Meena saying she can’t kill her, but this angered Meena who told her she could do anything she wanted before kissing her.

Meena then left the room saying: “If Dad could see us now eh? For once maybe he’d see that you don’t have all the answers. But don’t worry we’ll figure it out. After all, we’re in this together now.”

Could Meena be planning to kill Manpreet and blame her for her crimes? It seems the only way out of this one…

Emmerdale: What’s next for Manpreet and Meena?

Emmerdale is staying tight-lipped on what is happening next for Meena and Manpreet, but one thing is for sure, Manpreet is in danger.

In tonight’s episode Rishi did think he heard her in trouble, but Meena lied and said she had gone to Ibiza to be with her daughter Aiesha.

Will Rishi figure out something is going on?