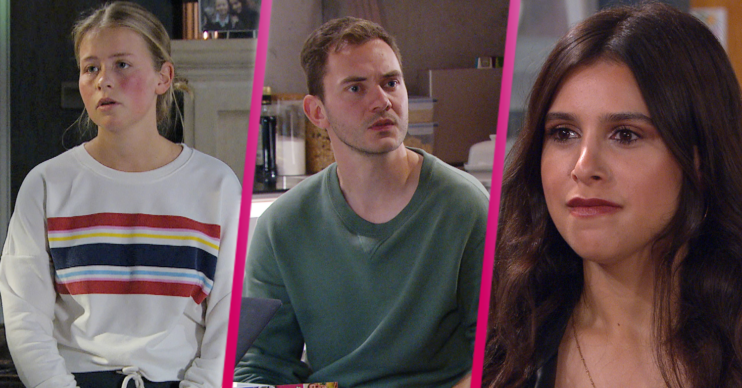 Emmerdale: Liv will be blamed for Ben’s murder, fans predict

Emmerdale fans are predicting that Liv Flaherty will be blamed for Ben Tucker‘s death after he was murdered by Meena Jutla.

Recently Liv found out Ben and her brother Aaron were planning to move to Cornwall so Ben could start a new job.

She tried to sabotage Ben’s chances by pretending to be Kim and giving him a bad reference. However when Ben and Aaron found out they were furious and recovering alcoholic Liv began drinking again.

In last night’s scene (Thursday, November 26) Ben and Liv got into an argument over Aaron and what’s best for him. The argument was broken up by Laurel and Ben told her that Liv was drinking again.

Later Ben snuck back into the HOP to try and find evidence proving what happened at the survival challenge wasn’t his fault.

He found footage of someone trying to drown Vic and called Billy, who was on a date with Meena, to come and see it for himself.

Billy refused, but Meena realised Ben was about to catch her for trying to murder Vic.

Ben soon found Liv trying to steal booze. In the HOP office Ben and Liv got into an altercation and he ended up pushing her to the ground.

Read more: Who is Gavin in Emmerdale? What else has Ben Richards been in?

Ben also recorded Liv being aggressive towards him and said he was going to show it to Aaron.

Liv left with Ben’s phone and later Lydia saw her outside the HOP being sick. Lydia tried to help but Liv was awful to her and stumbled off.

Emmerdale: Liv will be blamed for Ben’s murder, fans predict

Meanwhile in the HOP Meena approached Ben telling Billy sent her. However she ended up confessing she tried to kill Vic and tried to take the footage, but was unable to get it from Ben.

Ben ran with the footage and Meena chased him but slipped on the wine Liv spilled and was seemingly unconscious.

Ben got to his car with the footage but felt bad leaving Meena so went back to help.

However he saw Meena wasn’t on the floor and when he went outside, he heard a noise.

Soon Meena hit Ben over the head with an oar. She re-watched the footage and took Ben’s bracelet off him, but when he made a noise she hit him over the head again, killing him.

Now fans think Liv will get the blame for Ben and Meena will get away with her fourth murder.

Anyone else think Liv will be blamed for Bens demise🧐? #Emmerdale

#Emmerdale who killed Ben? Well obviously it was Liv. She's got scratches on her, she's been seen outside The Hop by Lydia, she says she hates Ben, she's been drinking. I rest my case – lock her up!

I take it liv was on her own when Ben died? Poor girl will get the blame #emmerdale

Ben dead Aaron leaves and poor liv gets arrested for Ben murder? How much more do we have put up with Meena killing people #emmerdale

So liv will get the blame for Ben and Meena will carry on, how long is this gonna last #emmerdale