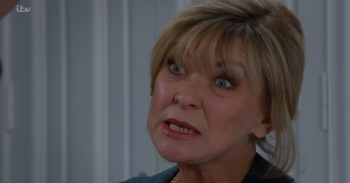 Fans of Emmerdale are begging soap bosses to give Kim Tate a worthy enemy.

The businesswoman returned to the soap in 2017 after a 20-year absence and while she’s had some high-profile storylines since, fans think she is being wasted.

They have hit out at the soap for not giving her any worthy enemies, now Graham Foster is dead, and they say it is seriously affecting the soap.

Writing on a thread on Digital Spy, one said: “The thing that bothers me about Emmerdale is that it has virtually no links to the past (bar one or two characters) and no ‘big’ characters.

“Even Kim Tate isn’t fulfilling her potential as she has no one of any great stature to spar with (I always thought her and Frank were evenly matched).”

A second said: “None of Kim’s partners/lovers have been any match for her since she returned. She just walks all over them.”

Other suggest Charity Dingle could have been a worthy foil for Kim – as she was, but not now.

One said: “I think they still show Charity’s edge, here and there, but her being behind the bar lessons her reasons for conflict with other characters.

Another said the soap was in a state of decline and needed urgent action.

“I’ve watched [Emmerdale] for 20-plus years as [it] was always on in my house growing up,” they said.

“I’ve carried on watching as an adult, always had some weeks or even a month or two where it’s not been boring or just not at a very good quality.

“Yet I cannot remember a time when [Emmerdale] was this poor for this long, it’s been on the decline since the Lachlan storyline was being wrapped up.”

Would bringing in an enemy from Kim‘s past change this?

Do you think the show is in trouble? Leave us a comment on our Facebook page @EntertainmentDailyFix and let us know what you think!