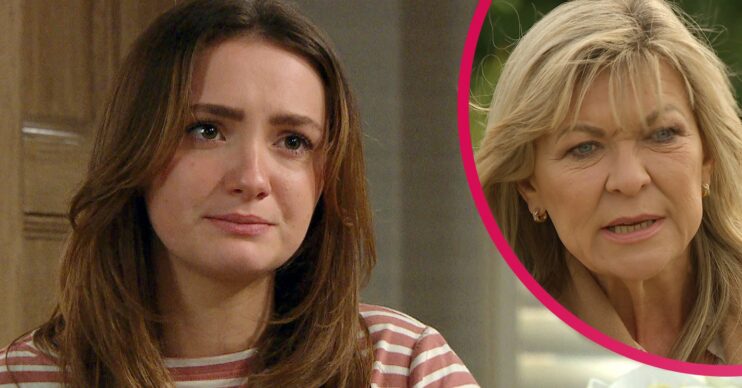 Emmerdale: Gabby chooses a name for the baby and viewers are taking the Mickey

Gabby ended up going into labour at Home Farm. However the house had no power, Gabby was on her own and her phone was dead.

Luckily Bernice came in and found her daughter in labour.

Diane came along and Gabby gave birth to her baby boy with the help of her grandmother and mum.

Tonight (Friday, October 29) Gabby was back in the village with her son.

Diane had made the decision to leave, but before going she paid Kim Tate a visit and told her there were a few conditions if she wanted Gabby to stay in the village and get to know her grandson.

The first being that Gabby got 20% of what she had. Also that Kim would forget ever having custody of the baby if anything happened to Gabby.

Diane also told Kim to learn to share, as her son has more than one grandparent.

Later Diane came back and told her Kim agreed, however it seemed Kim wanted the baby to be a Tate.

Gabby, whose surname is Thomas, told Diane she wanted to name her son Thomas.

However, some missed that detail and thought the baby was henceforth Thomas Thomas…

His name is Thomas Thomas? #Emmerdale

So Thomas THOMAS it must be then . Gabby is Gabby Thomas, surely she’s not going to call him Thomas TATE. #Emmerdale

Emmerdale: Thomas Tate – Who are his parents?

Thomas’s mother is Gabby and his father is Jamie Tate, Kim’s son, making him a part of the Tate and Thomas families.

Gabby fell pregnant after a one-night-stand with Jamie. However now Jamie is missing, presumed to be dead.

His grandparents are Kim, Bernice and Gabby’s stepmother, Laurel.

Gabby’s half-brother Arthur is Thomas’s uncle and her half-sisters Dee Dee and Dotty are Thomas’s aunts.