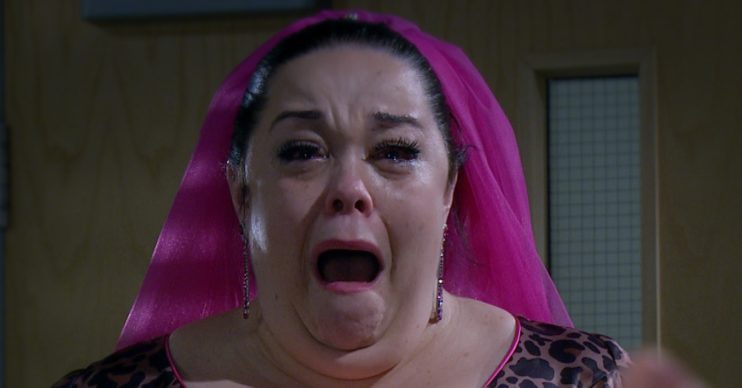 She finally learned the awful truth about Paul and Vinny

Emmerdale fans have been blown away by the acting after Mandy Dingle discovered Paul Ashdale abused their son, Vinny.

Jimmy King’s van crushed him as it smashed into the barn he was in.

She refused to believe it and when her son Vinny woke from his operation to fix his injuries, she tackled him about it.

However, as Vinny woke up, he was more concerned about covering for his dad’s abuse.

“Sorry about all this – I ruined your big day, didn’t I?” he said to Mandy.

And when she told him Paul had died, Vinny was distraught.

She told him: “There was an accident at the barn and a truck came off the road and crashed into it.

“Your dad was trapped inside, they tried everything they could… Vinny, he’s gone.”

Mandy then decided to ask Vinny about Liv and Aaron’s claims.

She asked: “It’s just our Aaron and Liv said he used to lash out at you – is it true? Sweetheart you can tell me the truth.”

“I don’t know why they’re saying this, dad’s dead and you’re grieving,” he replied.

“He’d never do anything to hurt us, he loved us.”

But seeing Vinny’s face, Mandy knew he was lying.

Breaking down in tears, Mandy cried: “Oh my god, what has that man done to you?”

The acting in the episode blew viewers away.

One said: “A mother’s intuition the scene with Mandy and Vinny just had me in tears. Phenomenal acting from @Reallisariley and @Brad_J_J.”

A second said: “Brilliant acting from Lisa Riley, she really brings her character to life and her emotions are so real.” As well as that, they added: “I think she’s plays her part brilliantly, best character in this soap.”

Finally, a third said: “Great acting from everybody involved with Emmerdale this week, enjoyed every minute.”