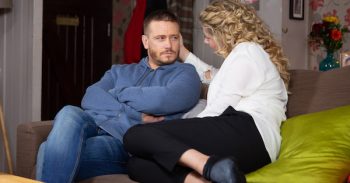 They've called him "thick" and "stupid"

Emmerdale fans are furious with David Metcalfe and branded him “thick” after missing clues to Maya’s grooming.

Last week, ‘the couple’ attempted to have sex in the village hall, but their plan was rumbled after David figured out his son planned to ruin his date with Maya and followed them. When David questioned the teenager, he came up with the excuse that his dad didn’t make time for him and Amba.

After Jacob left, David discovered Maya’s earring on the floor but still didn’t put two and two together.

Although viewers are sickened by Maya’s grooming they are also getting fed up with the shop owner for missing the clues of what his girlfriend has been up to.

How can David be so thick !! #Emmerdale

It's David who needs to open his eyes! Maya is so sick in the head, I don't believe she loves Jacob #Emmerdale

A third put “It’s David who needs to open his eyes! Maya is so sick in the head, I don’t believe she loves Jacob #Emmerdale” [sic]

Emmerdale fans were left disgusted after she made dirty comments to Jacob at a family dinner in Wednesday night’s episode (20.03.19).

In last night’s episode we saw Maya encouraging David to go away for the week and she would move in to “look after” Jacob.