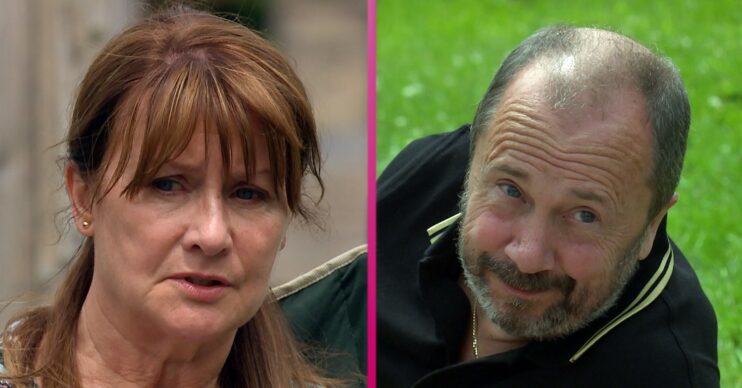 Recently nurse Wendy attended the funeral for her ex-mother-in-law. She also revealed that her former mother-in-law had left most of her money to her great-grandson, Victoria’s son, Harry.

Earlier this week, Wendy was shocked to see her abusive, criminal ex-husband Russ was in the village.

Russ began blackmailing Wendy, telling her he would tell everyone the truth about her if she didn’t get the £50k back from Victoria and Harry.

Feeling bullied, Wendy agreed to go along with it and introduced Russ to Wendy as Harry’s grandfather.

Russ said he wanted to get to know Vic and Harry and made plans to spend time with them.

Fans wondered what Russ had on Wendy, but after last night’s episode (Wednesday, August 26) they think they’ve figured it out.

In the episode, Russ went on a picnic with his grandson Harry, Victoria, Bob and Wendy.

He explained he turned down a job moving furniture as he had a bad back injury from where he broke it five years ago.

Wendy pointed out he must of have a good surgeon, looking at how his back is now.

However Russ said: “It’s the miracle of modern medicine. You should know being a qualified nurse.”

But as he said that, Wendy’s smile dropped, leaving fans convinced she isn’t a fully qualified nurse.

So my theory is Wendy’s secret it she isn’t a fully qualified nurse.

So my theory is Wendy's secret is she isn't a fully qualified nurse. #Emmerdale

I’ve been sat thinking about tonight’s episode.
Something was weird when Russ mentioned “qualified nurse” to Wendy, her expression dropped drastically. What if that’s her secret?
Is she a “legit” nurse? #emmerdale 💚

Is Wendy actually ‘not legally qualified’ as a nurse & her ex did something dodgy back in the day and this is the hold he has over her?? #emmerdale

Later Russ told Wendy he wouldn’t leave the village until he had the money, but will she help him?

What do you think Wendy’s secret is? Leave us a comment on our Facebook page @EntertainmentDailyFix and let us know what you think!