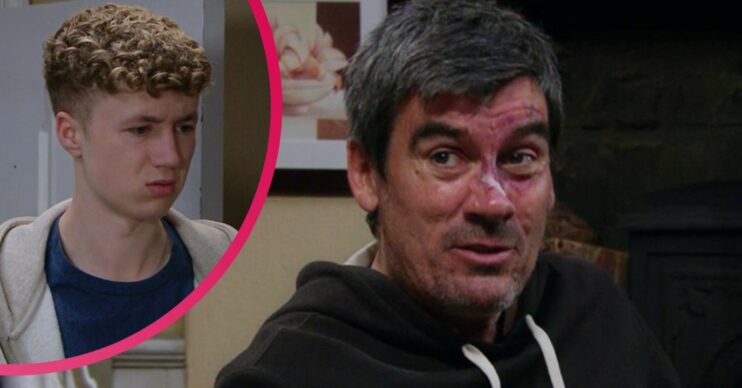 He finally opened up about his own dark past

Emmerdale fans were left sickened after Cain Dingle confessed to grooming and abusing an underage girl.

In last night’s episode (May 13), Cain opened up about his dark past to Charity’s son Noah in an effort to make him see how disturbing his behaviour is.

Noah has been stalking his ex Chloe Harris for weeks in a concerning storyline.

And after Cain initially promised to get Noah away from the village for a new life in Ireland – he changed his mind.

Instead, he wanted Noah to see how wrong his behaviour is.

Read more: OPINION: Emmerdale either bring Jamie Tate back or forget about him

And to do it he finally spoke about how his own sick behaviour.

More than 20 years ago, Cain had an affair with a married police woman named Angie.

When she broke it off, he took it badly and vowed revenge.

He decided to groom and abuse her underage daughter Ollie – sleeping with her when she was just 15.

Sick Cain even arranged it so they would be caught by Angie – but his plan backfired and Ollie’s elderly grandfather Len caught them.

Cain pushed him over a balcony and fled, leaving him for dead.

The storyline recently played out on Classic Emmerdale, leaving viewers utterly sickened that Cain had faced no consequences for his actions – nor mentioned it since.

But that all changed last night when Cain spoke about it.

He told Noah: “A few years ago I was seeing this woman, she was married and after a while she decided to call it off.

“I tried to change her mind, but it didn’t work. She said she didn’t want her husband finding out.

“I was gutted and I was angry and I did something really daft – I hurt her.”

He added: “I loved Angie but my idea of love back then was twisted a bit like yours is now.

“You can’t make people love you, you’ve got to earn it.”

Emmerdale fans sickened over his confession

Viewers were disgusted with his confession.

On Twitter, one said: “Cain’s obviously not wrong about Noah but what about his own seriously [bleep] up past? Basically a paedophile after what he did to Ollie Reynolds, who was only 15.”

A second said: “When is Cain going to be held account for constantly taking advantage of minor girls for sex? When is he going to jail for murdering the Sharma’s cat and assaulting Charity, etc etc etc.”

When is Cain going to be held accountable?

A third said: “What about Cain Dingle when he groomed schoolgirl Ollie Reynolds into bed in 2001?? Apparently that storyline was OK back then.”