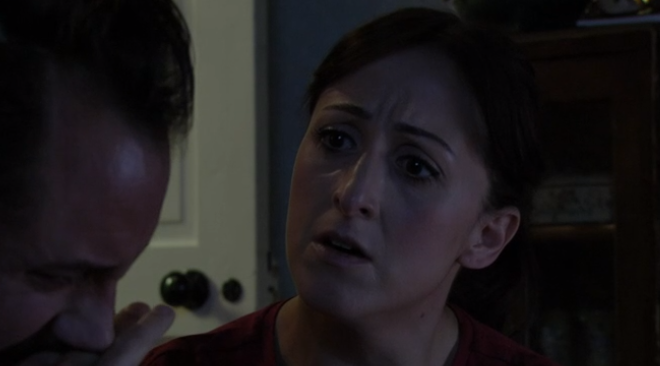 Sonia and Martin already have a daughter together

Viewers of EastEnders have predicted Sonia Fowler will fall pregnant with her ex-husband Martin Fowler’s baby.

Earlier this week, after a successful heist Martin and Tubbs celebrated but as they drove down the road they hit an unknown person.

Instead of calling for help, they drove off leaving the man in the road.

As the guilt began to get to him, Martin confessed to his ex about what happened.

In last night’s episode (December 26 2019), Sonia did some research and discovered the hit-and-run victim was in hospital.

After taking Martin to the hospital, back at home she confessed she still loved him and that he was still the Martin she fell in love with when they were kids.

Eventually the pair ended up sleeping together and viewers have predicted that Sonia will fall pregnant with his baby.

Sonia and Martin to have another baby, to replace bex when she leaves for uni? #Eastenders

Ugh what if Sonia gets up the duff #EastEnders

Oh gawd, so when Stacey comes back I suppose Sonia will be pregnant, all these seeds being dropped 'willy nilly'!*! #eastenders

What if it is Sonia that ends up pregnant?!!! #EastEnders

Fans of the show know Sonia and Martin have a long history.

The pair have a daughter named Bex, who Sonia gave birth to when she was 15.

Sonia and Martin got married however they eventually split and Martin went on to marry Stacey Slater.

Earlier this year Stacey and Martin were forced to leave Walford when she attacked Phil Mitchell.

Sonia and Martin to have another baby.

Phil’s son Ben found out what Stacey did and told her to leave Walford while he covered up for them.

Martin eventually returned when he learnt Bex tried to take her own life, but when Ben saw he had returned, he forced him to do illegal jobs.

Martin broke off his marriage with Stacey telling her he still loved Sonia, when in reality he was trying to protect her.

Do you think Sonia will fall pregnant with Martin’s baby again?