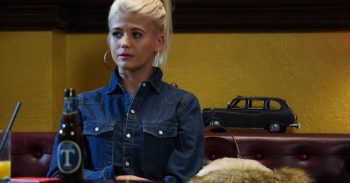 Last night Lola, who is known for wearing bright and colourful clothing, wore a bright green long-sleeved crop top on top of a bright green/yellow snakeskin patterned bralet with a matching skirt.

Viewers were baffled by her bright outfit, with one comparing it to a highlighter!

Everytime I see Lola in another outfit I get an immediate migraine. #EastEnders

Lola’s Wardrobe courtesy of the House of Stabilo #EastEnders pic.twitter.com/c5J6CQUWe6

Fair play to her but why does Lola dress like a 80s raver ?? #eastenders

Jesus! Did Lola get dressed in the dark?? #Eastenders

This isn’t the first time Lola has worn a bright outfit, a couple of weeks ago she sported a bright yellow hoodie.

At Billy’s party back in April, she wore a similar bright green crop top with a white skirt and a white jacket with black spots.

Lola arrived back in Walford recently with daughter Lexi and Lexi’s father Ben Mitchell, who also happens to be her distant cousin.

Ben initially arrived back with the plan to take his father Phil’s money and happiness, but it became more complicated when he found out Phil was broke.

Ben suggested they went into business and built the Mitchell empire up.

However, Phil’s trust in Ben was left damaged after Ben threatened gangster Danny, who ended up kidnapping Ben’s sister Louise.

Things for Ben fell apart even more when Lola let slip Ben’s plan to grandfather Billy Mitchell, who relayed the information to his cousin Phil.

While Lola has been on the square, she has kissed her ex Jay, however upon discovering she was actually engaged to a man named Ewan, he ended up getting into a relationship with Ruby,

Lola has also been there to guide Louise, who recently discovered she was pregnant at 17 years old, by telling her she never regretted having her daughter Lexi at a young age.