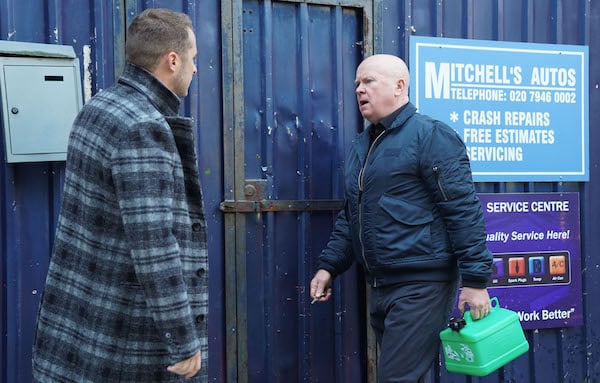 Phil's a man on a mission

There’s drama heading for EastEnders next week when Phil Mitchell’s out for revenge… but will he realise he’s got the wrong man before it’s too late?

It’s no surprise that Phil is on the warpath since finding out that Sharon’s baby isn’t his.

But while you don’t cross a man like Phil and get away with it, it seems innocent Jack Branning is about to pay for Keanu Taylor’s mistakes.

Phil has become convinced that Jack and Sharon are having an affair, and he is out for revenge, despite son Ben Mitchell trying to talk him round.

Knowing what Phil is capable of, Ben panics when he hears from Jay that Lola and Lexi are out for the day with Jack.

Terrified that his daughter is about to get caught up in Phil’s revenge plot, Ben races to scupper their plans, and Jack is left miffed when his day out with Lexi and Amy is ruined.

But little does he know, Phil is convinced that Jack’s the father of Sharon’s baby, and he’s busy plotting his death.

Realising that his dad is struggling with everything, Ben offers to sort Jack himself, but Phil isn’t going to let Jack off the hook that easily.

So while Ben enjoys spending time with Lexi, Lola, Callum and Jay, Phil is busy plotting his next move – and this time he’s armed with a gun.

Determined to prove that he’s not a man to be messed with, Phil goes to extreme lengths to make sure Jack learns his lesson… but little does he know, he’s barking up totally the wrong tree.

When Phil finally catches up with Jack, the police officer begs Phil to believe that he’s not the one who got Sharon pregnant… but his words seem to fall on deaf ears as Phil ramps up his revenge at The Arches.

As things turn dark, Jack desperately tries to prove his innocence. But will he manage to persuade Phil that he’s not the right man before it’s too late?