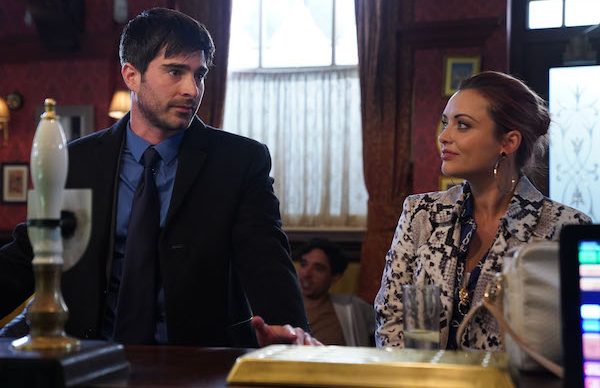 Leo is the son of Tony King

It looks like Whitney Dean could be in danger as newcomer Leo King brutally attacks her in upcoming EastEnders scenes.

As Whitney finally discovers Leo’s true identity they end up having a violent altercation at Tony’s grave.

Fans of the show know Whitney was groomed by Leo’s dad, Tony from ages 12 to 16.

Leo, who was in a relationship with Whitney’s mum Bianca, groomed Whitney into believing they were in love.

Whitney eventually told Bianca about her “relationship” with Tony and he was jailed and later died in prison.

However, Leo is convinced his father is innocent and is out for revenge on Whitney, who is now in her 20s.

After finding Bianca, Leo followed her to Walford and found Whitney.

He started building a relationship with the market stall owner and despite her sister Tiffany being suspicious of him, Whitney has continued to see Leo.

But it looks like Whit will be in danger when his motives are exposed, leaving her terrified for her life.

In pictures obtained by Metro.co.uk, Whitney and Leo can be seen having a confrontation in a graveyard.

In the on-location snaps it looks like Leo launches an attack on Whitney revealing his true identity in the process and saying that he blames her for Tony’s death.

Leo looks like he’s sporting cuts and bruises, but are they from Whitney defending herself, or someone else?

As Leo exacts revenge, Whitney realises she’s been lured into a trap, but what will the outcome be?