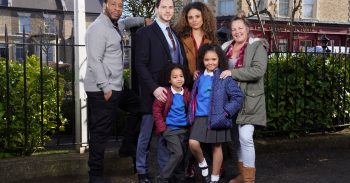 They will be arriving soon

It looks like the Taylor family are in for a shock when some surprising new arrivals reach Walford later this month.

It was recently announced Neon Jungle’s Jessica Plummer would be playing Karen Taylor and Mitch Baker’s daughter Chantelle but she won’t be arriving on Albert Square alone.

Chantelle is followed by husband Gray and children Mia and Mackenzie.

The much talked about daughter of Karen and Mitch will instantly make an impact on the Walford residents.

Everybody wants to be Chantelle’s friend as she is bubbly, kind and easy-going. However, she is her mothers daughter and wouldn’t think twice about sticking up for herself.

Like Karen, her kids are her world and along with her successful solicitor husband she has everything she’s ever wanted.

But it suddenly becomes clear there is some tension between the mother and daughter.

Chantelle is very protective over her siblings, so how will she react when she realises Mitch is now a big part of all their lives after being absent?

Gray will be played by Toby-Alexander Smith. Gray was Chantelle’s ticket away from life with the Taylors. He works as a solicitor in the City of London and loves nothing more than coming home to his family.

Fans may recognise Toby from Doctors. He has also appeared in numerous other TV shows including Krypton, Berlin Station, and Flack.

Jessica is best know for her roles in feature films How to Talk to Girls at Parties , Wizards vs. Aliens, and Reflections. She is also part for the four piece girl group Neon Jungle.

Speaking about joining EastEnders, Jessica said: “Just like a majority of the UK, I grew up watching EastEnders. It’s an absolute honour to be joining the cast with all my favourites… Rickaaaaaaaay”.

Talking about the Atkins’ arrival, Kate Oates, senior executive producer of EastEnders, Casualty and Holby City said “I’m so excited to welcome Jessica and Toby to Albert Square. Chantelle is a Taylor through and through: tough sharp and streetwise.

“To the rest of the Taylor family, she is definitely the one who’s ‘done good’: leaving home early, and landing on her feet marrying the handsome successful Gray. But will Chantelle’s picture-perfect lifestyle put her and Gray into conflict with the rest of her family?”

Are you looking forward to The Atkins family arriving in Walford? Leave us a comment on our Facebook page @EntertainmentDailyFix and let us know what you think of this story.