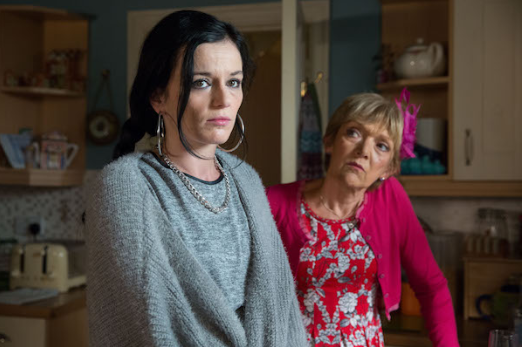 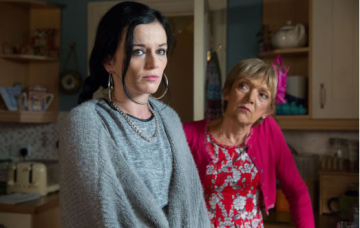 But will she reveal all to Kat?

As we all know by now, Hayley Slater is pregnant with Alfie Moon’s baby, but her secret is about to be rumbled by Jean.

Alfie and Hayley had a one-night-stand in Spain and the former Queen Vic landlord believes Hayley’s had a termination.

So far, Hayley’s managed to keep the identity of her baby-daddy a secret from the rest of Walford but – as we know – secrets don’t stay secret for long in Walford.

Jean has been trying to find out who the father is but, after getting nowhere with Hayley, she decides to do some digging of her own.

When Hayley begins chatting away about getting drunk in Spain, Jean starts putting two and two together.

Lies may break them. The truth could tear them apart.#EastEnders. Autumn trailer. @BBCOne. pic.twitter.com/kBG5jZWloO

She finally comes to the conclusion that Alfie is the dad and will ask Hayley outright if this is the case.

Hayley confesses as she realises she can’t lie any longer. But will Jean tell Kat the truth about Hayley and her estranged husband?

Jean can be seen confronting Hayley in the new EastEnders Autumn trailer which was revealed this week.

EastEnders confirmed last month that Alfie would be returning to Walford long term.

According to a report in Metro.co.uk, Shane Richie has been filming on location with Jessie Wallace.

Apparently Alfie is keen to get back together with Kat, but that growing bump of Hayley’s is sure to come between them at some point.

His return will play out later this autumn, with Alfie returning to London prepared to make another go of things with the love of his life.

They split after one of their children, Ernie, was scalded in the bath, after Kat was momentarily distracted.

The couple were last seen together on-screen in EastEnders spin-off Redwater, which saw them head to Ireland to search out her long-lost son.

He turned out to be a psychopathic killer priest, so that didn’t end too well!

So will Alfie and Kat get back together? Or will his secret baby with her own cousin mean the end of their relationship for good?

How will Kat react? Leave us a comment on our Facebook page @EntertainmentDailyFix and let us know what you think!