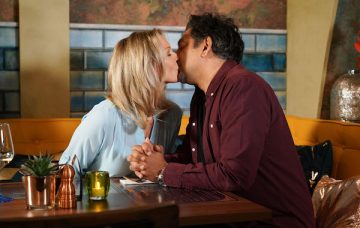 The legend has made a return to Walford

EastEnders fans were thrilled to see one of the BBC soap’s most iconic characters return to Walford last night.

Kathy Beale made a very welcome comeback to Albert Square on Thursday (7 February), and wasted no time in snogging the face off of Masood.

The legendary Kathy, who has been on the soap since the very first episode in 1985, arrived back in Albert Square courtesy of a black cab.

He wasn’t the only one to notice how hot she looked, with some fans saying she “looked 10 years younger”.

Just last month, soap fans had demanded to know the whereabouts of the matriarch…

The cafe owner, played by Gillian Taylforth, hadn’t been seen on the Square in months and no one seemed to have realised she’d gone!

But now the fan fave has returned – and wasted no time in getting reacquainted with Masood Ahmed as they started a romantic relationship.

The pair finally decided to give it a go, and sealed it with a kiss!

Catching up in the restaurant, Masood admitted he had missed Kathy while she was away, and Kathy replied: “I want to give us a go. You and me.

“A proper relationship where we do proper things. Films, food, nights in, night out, putting up with Ian.

“But always with each other. What do you think?”

The answer was a resounding “yes” – with lips.

How will Ian react when he finds out his business partner is dating his mother? Who cares!? The fans went wild!

One said: “Ian better not throw a tantrum over Kathy & Masood, they deserve happiness #EastEnders.”

“Yaaaaas Masood & Kathy back on,” said another, while one added: “Kathy and Masood finally together!”

“Masood and Kathy are great together,” added one more romantic.

I ❤️ Masood and Kathy #EastEnders

Others remarked on how youthful Kathy looked, saying: “Where’s Kathy been? She looks 10 years younger! #EastEnders.”

Another said she’d come back “fit”.

A third jumped to the conclusion that Kathy’s appearance wasn’t just down to rest and relaxation, tweeting: “I want the number for Kathy’s surgeon, she looks amazing #EastEnders.”

I want the number for Kathy’s surgeon, she looks amazing #EastEnders

Here she is! Looks amazing after her rest! 😍 Kathy is BACK! #EastEnders

Ey up Kathy is back!, #Eastenders & #GillianTaylforth looks amazing for 63, don't know what she's had done but it's amazing.

While Kathy is loved up and looking good, she might turn a bit pale when Ian tells her the news that Bobby Beale is set for release…

Ian recently received a letter informing him his killer son will be free in June.

Enjoy your happiness while it lasts Kathy!

Do you think Kathy and Masood make a good couple? Leave us a comment on our Facebook page @EntertainmentDailyFix and let us know what you think!