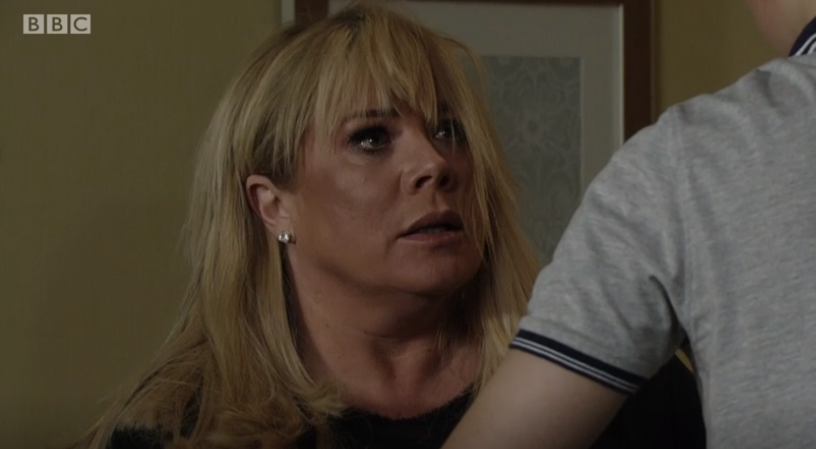 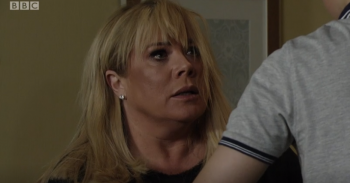 They were amused by the comedy side effect though!

Sharon was trying to get through to her son after she’d thrown a punch herself at his ‘mate’, Stix.

Denny had been planning to run away with Stix after the gang had groomed Phil Mitchell’s stepson into getting involved in their drug deals.

Sharon wanted answers from her son over why he wanted to leave the family home.

“Talk to me Denny,” she begged.

When she replied with: “Darling I’m worried about you,” Denny lashed out.

“‘Cos it suits you, the only time you care about me is when it suits you.” He then railed at her for going to Australia when he was bullied and beaten and left needing stitches.

As he stormed off upstairs, Sharon followed him telling him she wasn’t finished talking to him.

That’s when he dealt the killer blow – calling her a “total slapper” and punching her hard on the face.

How has it come to this? #EastEnders pic.twitter.com/wdypfbFk8B

Fans were horrified at what many believe is the start of a domestic violence storyline between Sharon and her son.

Dennis punching Sharon is one of the most shocking duff-duffs we’ve had in ages, Letitia Dean put in another fantastic performance. Those scenes in Dot’s kitchen were electric! #EastEnders

@bbceastenders Wow, Denny—erm, DENNIS! I felt that punch all the way across the pond here in North Carolina! Sharon will be sporting a bruiser soon! Ouch! #EastEnders

The Sharon & Dennis scene was interesting tonight. I could see where he was coming from & she lost her temper & didn’t listen to his valid points but he was out of order. I gasped when he hit her! I hope this is actually going to go somewhere unlike the 2015 incident #Eastenders

Wow, I literally  and gasped when Dennis hit Sharon. So shocked #Eastenders @bbceastenders

But some were more bothered by what they called a “comedic” sound effect over the top of the punch.

One even compared the noise to the old Batman TV show starring Adam West!

Who put that sound effect over Denny punching Sharon so it sounded like he was hitting a metal door, screaming #EastEnders

Read more: EastEnders SPOILER: Keanu puts Louise in danger when he rejects her

While Sharon reels from what’s just happened with her precious little boy, who know what hardman Phil’s going to say when he finds out.

Who can Sharon turn to to help with her wayward son? Is there any coming back for him? Or has it gone to far?

EastEnders continues on Friday at 8pm on BBC1.

Did you see Dennis hit Sharon? Leave us a comment on our Facebook page @EntertainmentDailyFix and let us know what you think.