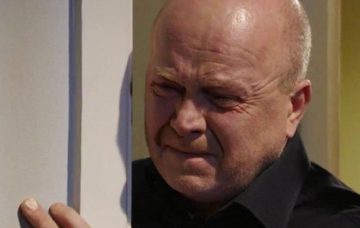 Too much information mate!

EastEnders fans felt a little bit grubby after watching the BBC soap last night – thanks to Phil Mitchell sharing too much information with them about his ‘sex life’.

On Tuesday (5 February), Phil wasn’t getting any action in THAT department from his wife Sharon, so decided to find it elsewhere.

By going solo… (Ewww, stop, no more, can we pretend we didn’t hear that please?)

After agreeing to buy Mel Owen’s half of the club, Phil and Sharon celebrated in the Queen Vic.

A few drinks later, the mechanic put on his best ‘sex eyes’ as he made amorous advances towards wife Sharon.

But, later back at the house, she was having none of it.

After she told her hard-man husband she had a headache – otherwise known as ‘I fancy Keanu more’ syndrome – a disappointed Phil asked if there was anything he could do to help her.

To which she replied: “No, it’s okay, I’ll sort myself out.”

All pretty normal so far, until Phil’s next comment left viewers squirming, when he replied: “You and me both.”

While some called the comment “comedy gold”, others felt “physically sick” and “grossed out”.

One said: “In 15 years of watching EastEnders, nothing has made me feel more ill than a Phil Mitchell [bleeping] reference.”

Eww, just been totally grossed out by #EastEnders 🤮 I don’t want to think about Phil Mitchel “sorting himself out” thank you very much!!

Phil Mitchell saying "you me both" to "sorting himself out" has made me feel physically sick.
💦💦🤢#eastenders

Phil Mitchell sorting himself out – he has the best lines 😆😆 #eastenders

Hahahaha Phil Mitchell saying he has to sort himself out is the funniest innuendo #eastenders have used recently.

Phil Mitchell “you and me both” funniest line for ages! 🤣 #EastEnders

@BBC I do not need to watch #Eastenders and hear Phil Mitchell allude to the fact he is going to knock one out. That is a mental image that will stay with me until the day I die. pic.twitter.com/6w9TXD6jHN

Unbeknownst to Phil, Sharon and her on-off lover Keanu had just had a heart-to-heart in the toilets of the Queen Vic – as you do – where Keanu had made his feelings clear…

While Louise is just a fling, it’s Sharon he really loves.

Who would you choose? Phil Mitchell or Keanu Taylor? Leave us a comment on our Facebook page @EntertainmentDailyFix and let us know what you think!