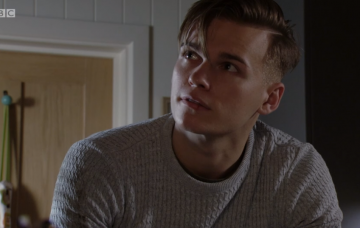 The teenager dug up Ray's body

EastEnders viewers have been left repulsed by Hunter Owen’s latest actions and have branded him a psychopath.

The teenager is already totally unfazed after murdering his stepdad, Ray Kelly, and helping his mum bury the body.

And now, as Mel starts to fall apart, Hunter’s been back to the scene of the crime and dug up the rotting corpse, rooted around to find the bullet and remove it, therefore removing the evidence.

Whilst he possibly hasn’t thought that he’s going to have left his DNA all over the body after that, he seems to think that’s got everything covered as the police won’t be able to link the weapon to him and Mel.

While Mel spent most of Monday’s episode umming and ahhing over whether to go to the police about her son, she ended up deciding not to.

But by that point Hunter had already done the disgusting deed. She was stunned as he presented her with the bullet.

“I thought about moving the body somewhere more hidden or destroying it but I just couldn’t do it on my own, so I figured if the police can’t find the bullet it removes any connection between us and the murder weapon,” he calmly told his mum.

“Can you hear yourself Hunter?” an increasingly worried Mel cried.

“Mum he’s dead it’s just a body, rotting flesh nothing to be scared of…” Hunter coldly replied like he was talking about going shopping.

As Mel struggled to find the words to reply to him, she ended up stopping herself short of calling him a psychopath.

But Hunter terrifyingly continued: “I feel fine, I’ve killed a man and I’m not cracking up, I’m strong and I’m going to make sure we both get through this.”

Fans were horrified at Hunter’s attitude and grossed out at the fact he’d dug up the body.

Why is Hunter acting it's normal to kill someone, then bury the body. Then wait a month, find where the body is hidden, dig it up just to get a bullet from the already decaying body…. #Eastenders @bbceastenders pic.twitter.com/HFNCOPoP4p

Hunter has been out, in the day, singlehandedly dug up a corpse, found a wound, removed a bullet from it and rebuired it. Seems believable to me. #EastEnders

Hunter up to the eyeballs in month old, rotting, Ray. Pleasant #EastEnders

Hunter are you ok hun? 😩🤢 #Eastenders

Hunter that is just disgusting #eastenders

Hunter is a lil bit sick me thinks .. #EastEnders

ewww. Did Hunter take the bullet out of Rays dead body? 🤮 #EastEnders

As Mel struggles with what to do next, the net is set to start closing in.

The police are going to come calling next week and Mel will be taken in for questioning.

Instead of giving her confession, Mel decides the best thing to do it flee. Will the cops get them before they do?

What did you think of Hunter’s confession? Leave us a comment on our Facebook page @EntertainmentDailyFix and let us know what you think.