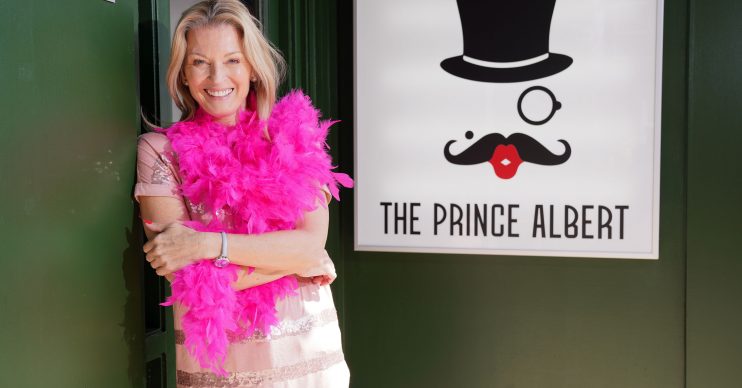 Should she be slowing down?

Fans of EastEnders have accused the BBC soap of “forgetting” how old Kathy Beale is.

The veteran Walford character, who has appeared on and off since the BBC serial drama started in 1985, has recently started a new business venture – but viewers believe she should be slowing down!

After all, Kathy – played by Gillian Taylforth – is supposed to be 69 years of age (six years older than the actress who plays her).

In fact, Kathy has embarked on a business she has little knowledge of, and is now holding down two jobs!

Perhaps she is Albert Square’s answer to Lord Alan Sugar?

The matriarch has worked in the Albert Square cafe for decades, but has just opened new gay bar The Prince Albert after selling a necklace Ben Mitchell gave her for a whopping £100,000.

But some viewers have been left baffled by the move.

“However actress Gillian Taylforth is five years younger and, given her youthful appearance, she could pass for 10-15 years younger than that.

“Do you get the feeling the writers are forgetting how old she actually is?”

The curious fan went on to say: “For example, opening a new business, a late night bar as well, at her age seems a bit strange. What almost 70-year-old does that?”

Another thought the same, saying: “I agree. Kathy already works all day in the cafe, and now she has taken on a new business as well.

“She is supposed to be nearly 70 and, while it’s great to keep active as long as possible, I do feel like she’s written to be middle-aged rather than a pensioner.”

A third wrote: “This is always the problem in casting a younger actor to play an older character, it should always be the other way round.”

However, others disagreed, with one insisting “age is just a number”.

A user wrote: “Kathy doesn’t see herself as an old woman. She is nothing like that in appearance or behaviour. She still has plenty to offer the world.”

Another added: “I think it’s realistic. People are healthier and do look and act younger for their age than they used to.

“The stereotype of a 69-year-old shuffling around with arthritis and wearing sensible shoes and cardigans isn’t true to life anymore.”

A third joked: “New age appropriate storyline for Kathy… She is going to the Minute Mart to buy some Werthers Originals, when she slips on some ice.

“She breaks her hip and has to go on the waiting list for a new one. In the meantime, she hobbles about on a walking stick, moaning about the weather and telling people in the gay bar her life story.”

One fan simply gushed: “I tell you what, Kathy Beale/Gillian Taylforth has aged like a fine wine! She still looks hot.”

BBC boss Kate Oates previously revealed she wanted to introduce the gay bar to add some diversity to the much-loved soap.

Do you agree that Kathy is too old to have two jobs? Leave us a comment on our Facebook page @EntertainmentDailyFix and let us know what you think!