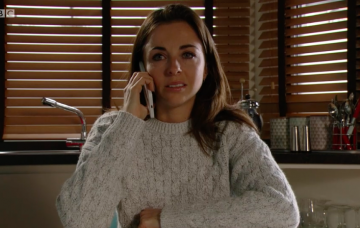 EastEnders viewers furious as Ruby ‘gets away with sexual assault’

EastEnders fans have slammed the soap after it was revealed Ruby Allen wouldn’t be prosecuted for sexual assault.

Ruby had taken advantage of one of her former employees, Blake, who felt he had to sleep with her to keep his job.

He arrived in Walford after reporting Ruby for the sexual assault after his girlfriend helped him understand what she had done to him.

But in last night’s episode it was revealed that after breaking the law and contacting Blake to demand he explain himself, he had withdrawn his statement against Ruby.

After hearing the news she had gotten away with sexual assault, Ruby decided to continue with the charges against her rapists.

Her designated SOIT (sexual offence investigative technique) officer Claire asked her to reconsider and told her own heartbreaking story about why she does what she does.

But first she told her that because Blake had withdrawn his statement “it’s as if it never happened”.

The storyline’s twist left fans furious over the male victim being treated as less of a victim because Ruby was the abuser.

One said: “Men CAN get raped and assaulted too and so far is shown as a joke. #EastEnders”

A second said: “#EastEnders She brushed off the fact Ruby sexually assaulted someone and guilt trips at the same time wtf.”

Another added: “Someone turning up to accuse Ruby of sexual assault is so strange… This storyline misses the mark so often #EastEnders”

“The Ruby twist is unnecessary and badly handled,” said someone else.

In the episode, Claire had explained to Ruby: “Do you know why I do this job? A woman I’m going to call Carly.

“It’s so much easier to walk away, which is what I did. It was a relief to be honest. But then the man who attacked me attacked Carly but it was worse.

“Carly took her own life. It’s Carly that gets me out of bed in the morning.”

Later Ruby called Claire back and told her she would continue with the charges against her rapists.