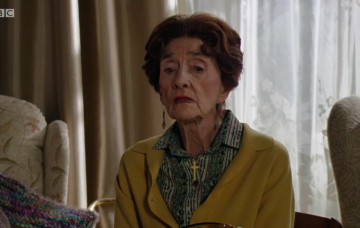 EastEnders’ Dot Branning a millionaire and fans are shocked

Fans were shocked last night after the gentle gossip discovered Dr Legg had a secret fortune and he’d left it all to his dear friend.

When his solicitor arrived to read his will at Dot’s house, she didn’t think she was left anything but interrupted to say she would have liked a scarf.

Instead she was left shocked when she was told Dr Legg had left her his Golders Green estate worth millions.

“She’s a millionaire,” said Stuart as Dot struggled to comprehend what had happened.

Later she insisted she didn’t need the money, but it didn’t stop her making plans for it.

She said: “I don’t need all that money Sonia. I mean maybe some so I could buy this house off the council.

“And I could help Charlie and his family. And Dotty my little granddaughter, and you and Robbie.”

She added: “I’m going to say a prayer and talk to Jesus. He’ll tell me what to do.”

Later she decided to leave Walford to go to Ireland for a while to visit Charlie her grandson.

She told Sonia: “I’m going to go over to Ireland and spend some time with my grandson Charlie.

“What’s been going on here has all been too much for me, I’ve got to get away and clear my head.”

Fans couldn’t believe what had happened with one tweeting: “Dot’s a millionaire! It’s the least she deserves. #EastEnders”

A second said: “#EastEnders Dot is a millionaire, who would have thought it.”

Another added: “Dot should take Halfway as her young lover now and be his rich millionaire cougar #eastenders”

What do you think Dot will do with her money? Leave us a comment on our Facebook page @EntertainmentDailyFix and let us know what you think!