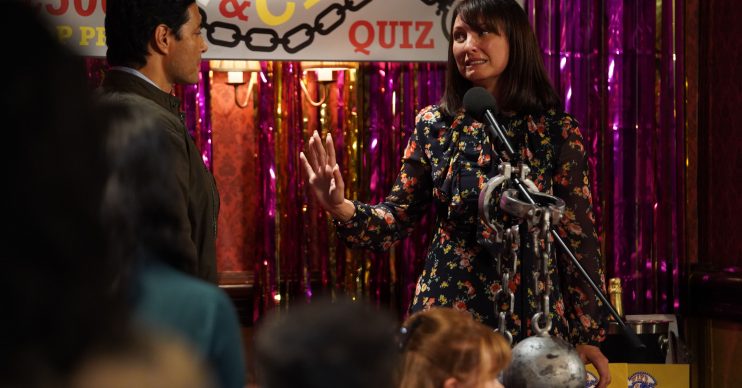 Honey has known for a while that Adam isn't loyal

Viewers of EastEnders are ecstatic as Honey Mitchell finally took down her cheating boyfriend Adam Bateman.

Honey has known for months that the dentist had an affair with Habiba Ahmed behind her back, but has turned a blind eye to his infidelity.

However Honey finally reached the end of her tether in last night’s episode (December 4 1019).

Honey soon pieced together that Adam had been seeing another woman again.

At the Ball and Change event at The Vic, Honey saw Adam flirting with a girl at the bar and decided she had had enough.

She got on the stage and exposed Adam for the liar and cheater that he is.

As she broke down in tears, she said: “I just wanted to say that these past two nights away from Adam have been quite tough, because I’ve missed him.

“But I miss him a lot really because he always seems to be away. I don’t know where. I mean he tells me it’s work.”

Adam then tried to get his girlfriend off stage but Honey continued: “Doing the swap, it was so nice living with somebody that truly cared about my feelings, who treated me with respect and dignity.

“Because it’s been so long since I’ve had that…”

“And it was so nice to be living with somebody that isn’t sleeping with their work colleague… Or a patient, or his personal trainer, or any bit of skirt that happened to be passing by.”

When Adam tried to stop Honey once again, Mick threatened to throw him out and Honey continued telling her friends and neighbours it was nice to not have to worry about Adam’s lies and emergency appointments.

Adam tried to comfort Honey but she stormed out of the pub and later at home, Adam tried to turn things around on Honey and convince her he wouldn’t cheat on her.

But Honey was having none of it and threw him out of her house.

As the argument moved onto the street, Adam made some disgusting remarks about Honey’s eating disorder and claimed that he was too good for her.

However Honey decided she wasn’t going to be spoken to that way and hit Adam in the face with a bin before telling him she hoped he knew a good dentist.

Viewers were ecstatic that Honey finally stood up to Adam and threw him out.

Just caught up on last night's #EastEnders and FINALLY Honey ditches Adam and with a food recycling bin. 😂👌

I think we can all give a round of yessss honeys!!! #eastenders @EmmaBarton

YES Honey. That's how you tell them cheating scumbags #EastEnders

I’m still not over Honey smacking Adam with a wheelie bin tbh. What a moment. #EastEnders

Loved Honey tonight! Throwing that bin in Adam's face was the icing on the cake! GO HONEYYY 💪🏼💪🏼 #EastEnders pic.twitter.com/4gVc0bJQSO

Did you enjoy seeing Honey expose Adam? Leave us a comment on our Facebook page @EntertainmentDailyFix and let us know what you think!