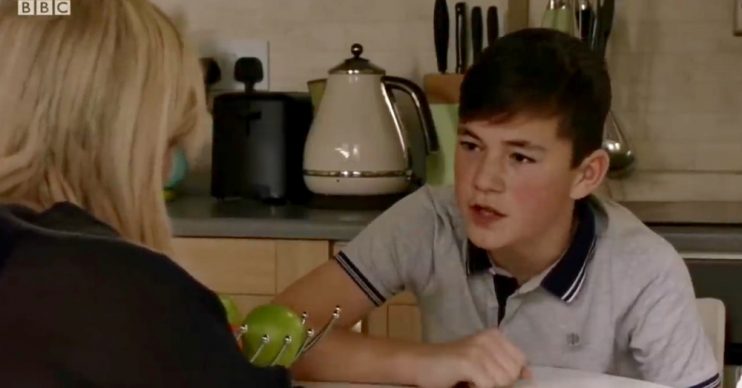 Has he been eating his Weetabix?

On Thursday (September 26), Sharon’s son made a rare appearance from his room – and viewers were quick to notice how different he looked.

The schoolboy is now taller than his mum and stepdad Phil Mitchell!

Denny, played by actor Bleu Landau, appeared on-screen for the first time in months and was seen arguing with his mother about wanting a puppy.

Little did he know, pregnant Sharon had other more pressing matters on her mind after Mel Owen threatened her son’s life in her nasty blackmail campaign.

But as mother and son squabbled, fans couldn’t believe how changed Denny was.

One wrote: “Sooooo Denny is all of a sudden 6ft tall #EastEnders.”

Another said: “I had to press pause on that! Denny’s grown a foot since he last stood next to Sharon.”

I had to press pause on that! Denny grew a foot since he last stood next to Sharon. 😳 and 😳 You know what? That’s the story tonight. #DennyIs6FTTall @bbceastenders #EastEnders

Crikey, has Denny been drinking Miracle Gro…?! He's not been seen for weeks and now is taller than Shazza! @bbceastenders #EastEnders 😁 😂

“Denny’s taller than Sharon now?” exclaimed one more, and another joked: “Crikey, has Denny been drinking Miracle Gro…? He’s not been seen for weeks and now is taller than Shazza!”

Soap fans will know that Denny is Sharon’s son with the late Dennis Rickman, who was played by actor Nigel Harman.

Having believed she was infertile, Sharon discovered she was pregnant on Christmas Day 2005.

In typical soap fashion, husband and father of the baby Dennis was stabbed and killed in the early hours of New Year’s Day 2006 by Danny Moon.

A devastated Sharon moved to Florida to escape Walford, where she gave birth to their son, naming him Dennis Junior.

The pair returned in June 2012, with Harry Hickles playing the role of Denny, before being replaced by Bleu in 2015.

Sharon is now expecting another ‘miracle’ baby with her husband Phil Mitchell – only it isn’t his, it’s Keanu Taylor’s.

Did you notice the change in Denny? Leave us a comment on our Facebook page @EntertainmentDailyFix and let us know what you think!