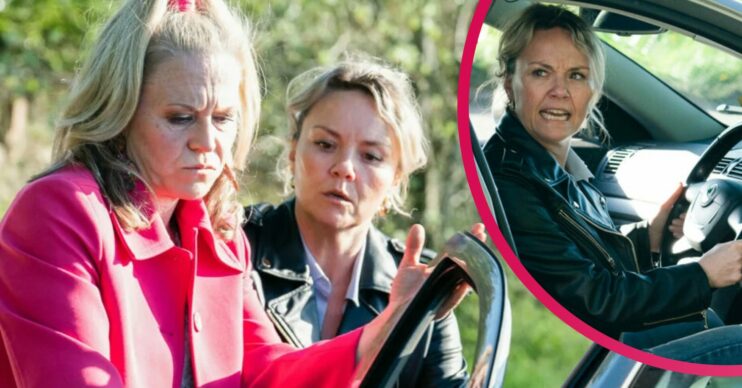 EastEnders spoilers for tonight (Monday, 6 June) reveal a car crash drama which could spell the end for two much-loved characters.

Meanwhile, Kheerat is concerned for Ben and Ash has a secret.

All this and more in tonight’s EastEnders spoilers.

Linda heads off on a trip with Nancy, planning to tell her about the missing money while they have some time alone.

However, when Zack lets slip to Nancy about Linda planning to leave a few weeks back, Nancy is upset.

As they drive, Nancy starts to quiz Linda about why she was leaving. But before Linda has time to explain everything, Nancy storms off and heads back to the Square.

As Linda realises the car won’t start and she’s stuck, she quickly turns to booze.

Meanwhile, Sharon has been winding Janine up, knowing that Linda is planning to tell Nancy that Janine stole her money.

But Janine then intercepts a call from a drunk Linda, so heads off to find her.

Janine grabs a cab and when she reaches Linda, manages to get the car to start.

As she drives Linda and little Annie home, Janine pleads with Linda not to tell Mick what happened with the money.

Janine opens up about her feelings and tries to appeal to Linda’s better nature.

However, tragedy strikes when Janine loses control of the car and it crashes.

Are Janine, Linda and little Annie in deadly danger?

Ben is still clearly struggling and Kheerat is concerned when he refuses to work at the Arches.

Later, Ben is rattled to see his rapist Lewis talking to Kathy.

Lewis tells Kathy he has been the victim of a homophobic attack, but Ben has no sympathy for him.

He tells Lewis that he has given him an STI.

The encounter rattles Ben and he’s later rude to Lola.

He pays Ben a visit and lets him know he is there for him if he needs to talk.

Can Ben finally open up?

Ash and Suki are at loggerheads, and suspicious of her daughter, Suki searches through her bag.

Meanwhile, Ash asks Vinny for money, but as he hands her the cash, Suki confronts her.

As a furious argument breaks out, Vinny snatches back the money.

What has Ash been hiding?