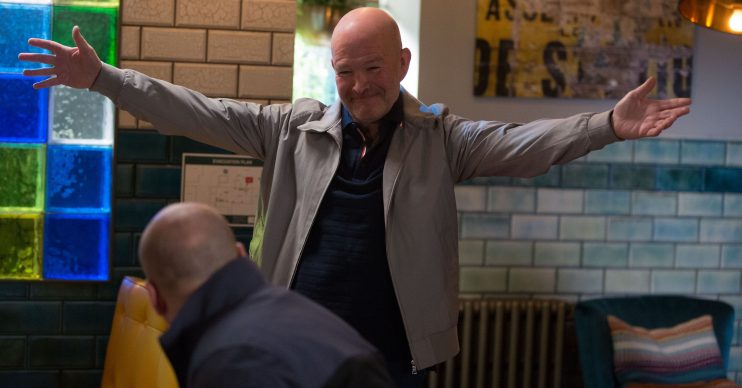 EastEnders has released the first look at Stuart and Callum’s dad Jonno.

The new villain will arrive in Albert Square next month to surprise his two sons after hearing about Callum’s engagement to Whitney Dean.

Jonno initially receives a warm welcome from Callum and Stuart but with a troubled past with their father, how will they react as he makes his presence known in Walford?

When Richard’s casting was announced, his character was teased an an old fashioned baddie.

A source told the Daily Star: “Richard’s character will be a proper old-fashioned baddie. He’s going to cause plenty of trouble.

“The team at EastEnders are thrilled to have someone so talented in the show. Richard’s only signed up for a short stint.

“But because he’s linked to Halfway and Stuart, it’s likely he’ll keeping returning to cause more trouble.”

The very first hint about just how evil Jonno is came in the summer trailer released by the soap earlier this month.

In it he attacks his son Callum before Stuart plays the unlikely hero and defends his brother.

“I’ll kill you,” he tells his dad in an effort to keep Callum safe.

But while many others would buckle at a death threat from evil Stuart, Jonno isn’t worried at all, telling him: “You haven’t got the bottle.”

Actor Ricky Champ recently teased how Jonno’s arrival would be “explosive” and explain why Stuart is like he is.

He told the Radio Times: “”Richard comes in and it’s an explosive little storyline. It illuminates a lot about Stuart and his brother Callum’s upbringing. It was rough!”

Are you excited to see the man responsible for Stuart’s villainy arrive in Walford? Leave us a comment on our Facebook page @EntertainmentDailyFix and let us know what you think!