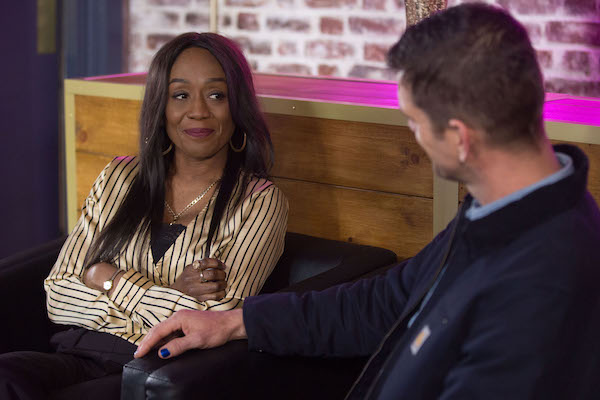 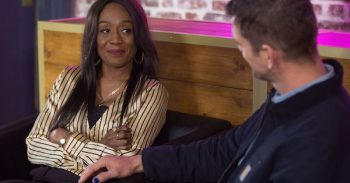 EastEnders SPOILER: Romance on the cards for Denise and Jack

Was it only a matter of time?

They’ve lived on the same Square for over a decade and haven’t really shared more than two words, but it looks like EastEnders’ Denise Fox and Jack Branning could be the one the other has been looking for when they go on a date.

It might come as a bit of a surprise – Jack’s usually got a thing for simpering blondes, and Denise’s most recent relationship was with much younger Kush Kazemi.

But it seems their failed romances of the past might have put them in the market for something more solid – could they find that in each other?

Jack’s relationship with Mel Owen has fallen off the edge of a cliff after he got her son, Hunter, locked up, but she’s pursuing him and playing nicely with revenge in mind.

She’s not getting very far, though, even when she strikes up a bond with Jack’s daughter, Amy, after she catches the youngster shoplifting sanitary products. Jack gives Mel short shrift and orders her to stay away from them.

But later in the week, Jack sees that Amy is happy when she spends time with Mel and he starts to soften towards his ex, even offering to look over her investment opportunity for her as a thank you.

Meanwhile, over in The Vic, Mick has decided Jack needs a new woman in his life and is determined to make sure it happens.

He sets Jack up with a friend of Linda’s, but in the process he ends up pushing Jack towards Denise. How’s that happened?

As the pair realise they have a lot in common and they actually get on, they decide to meet up again for another date.

It almost goes wrong when Jack can’t persuade Max or Rainie to babysit. But Amy has an idea and calls on Mel, who is happy to help out.

She’s not quite so happy – and more than a tad surprised – when she finds out Jack’s going on a date with Denise, and even Max can tell Mel’s a bit put out when he arrives and starts winding her up.

But what about Jack and Denise? Have they found something in each other?

Do Denise and Jack make a good couple? Leave us a comment on our Facebook page @EntertainmentDailyFix and let us know what you think!