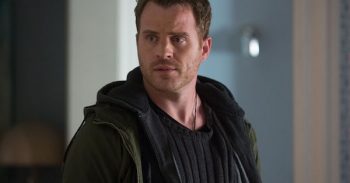 Fans of EastEnders are “devastated” that Sean has left Albert Square already.

Sean returned to Walford last week after 10 years away.

After taking Roxy’s daughter Amy from school, he brought the school girl back to her dad Jack and discovered that his ex-wife had died two years ago.

After finding out the truth, it soon became apparent that Sean was struggling with suicidal thoughts.

In Friday night’s episode (May 3) Sean was seen clutching a shotgun of the soap, as his mother Jean watched on.

This followed Stacey and a team of paramedics rushing to save Jean after she cut her leg on a walk.

They then found Sean on the verge of turning his shotgun against himself at a remote house.

In an emotional scene, Jean gently talked to her son as he hovered on the verge of taking his own life.

Jean, suffering from cancer, told her son that he needed to forgive himself for his past violence, and reassured him: “Whatever you’re feeling right now. It will pass.”

Fans praised Gillian Wright, who plays Jean, and Rob Kazinsky, who plays Sean, for their role in the emotional episode.

In last night’s episode (May 7) Jean wanted Sean to move into a flat nearby, however, he made plans of his own.

Although Jean was devastated that her son was leaving, Sean told her he was going to get help.

Before Sean left, he set Jean a ringtone of ‘Alright’ by Supergrass so she knew when he was calling.

Sean also promised to take Amy to Ibiza when she was 18 to see her mum’s bar.

Jean wasn’t the only one left devastated as fans were clearly upset about Sean’s departure.

Sean come back already, we miss you already #Eastenders

Thanks for watching Sean this week and thanks to @bbceastenders for having him. Thank you all for watching.
Just to share some final thoughts on the storyline and why it's so important to me.https://t.co/np1WQWM8o8

The tweet read: “Thanks for watching Sean this week and thanks for @bbceastenders for having him. Thank you all for watching. Just to share some final thoughts on the storyline and why it’s so important to me.” and attached a link to his personal message.

In the message, Rob explained: “The entire Sean arc for me is about asking for help. We are afraid to admit weakness, we see asking for help as being weak but it isn’t, it takes enormous strength to ask for help.”

EastEnders worked closely with Samaritans to ensure the storyline was portrayed as sensitively as possible.

Anyone can contact Samaritans FREE any time from any phone on 116 123, even a mobile without credit. This number won’t show up on your phone bill. Or you can email jo@samaritans.org or visit www.samaritans.org to find details of your nearest branch, where you can talk to one of their trained volunteers face to face.

Leave us a comment on our Facebook page @EntertainmentDailyFix and let us know what you thought of the episode.