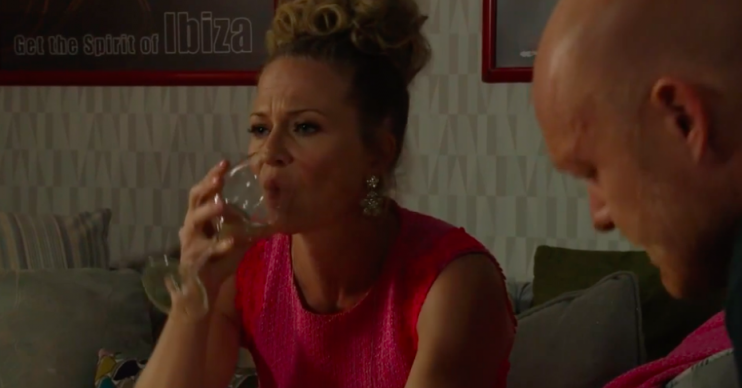 The actress went method to prepare for the scenes

The Queen Vic landlady has been on a downward spiral of drinking for months and it will come to a dramatic head over the festive season.

To prepare for the dramatic scenes, Kellie took drastic action and filmed herself downing six shots of hardcore booze so she could deliver her best performance.

She told Fabulous magazine: “Let’s just say that I do not have the same capacity for alcohol.

“Within 45 minutes I had passed out and was sick! But those videos were so valuable. Every five minutes I filmed myself doing my lines and I was repeating myself the whole time.”

She added: “It’s been really challenging because playing drunk is one of the hardest things to do. Booze turns Linda into someone who is almost unrecognisable, which is what I wanted – I wanted it to be hard to see her like that.”

Speaking further, she said it’s the same for the “flip-side” the next day, and the “shame, the embarrassment, the mortification” that follows.

New Year’s Eve will see a special episode devoted to Linda’s battle with the booze from her perspective.

The episode will be told entirely from the point of view of the Queen Vic landlady, who is played by Kellie Bright, as her love of the bottle “spirals further into addiction”.

Executive producer Jon Sen said: “Over the past few months, we’ve watched as Linda Carter struggles to cope and finds solace in the bottom of a bottle.

And the ep will show how Linda’s issues impact on her family, including husband Mick Carter, played by Danny Dyer.

Jon added: “This blistering episode portrays the harrowing consequences of Linda’s alcohol abuse on her friends and family alike. It is one of the most unique and important episodes we’ve made since my arrival a year ago.”

What do you think of Linda’s alcoholism storyline? Leave us a comment on our Facebook page @EntertainmentDailyFix and let us know what you think!