Villain Ben broke Callum's heart in order to save him from a life as a policeman with criminal Ben as his boyfriend in a gut-wrenching scene. 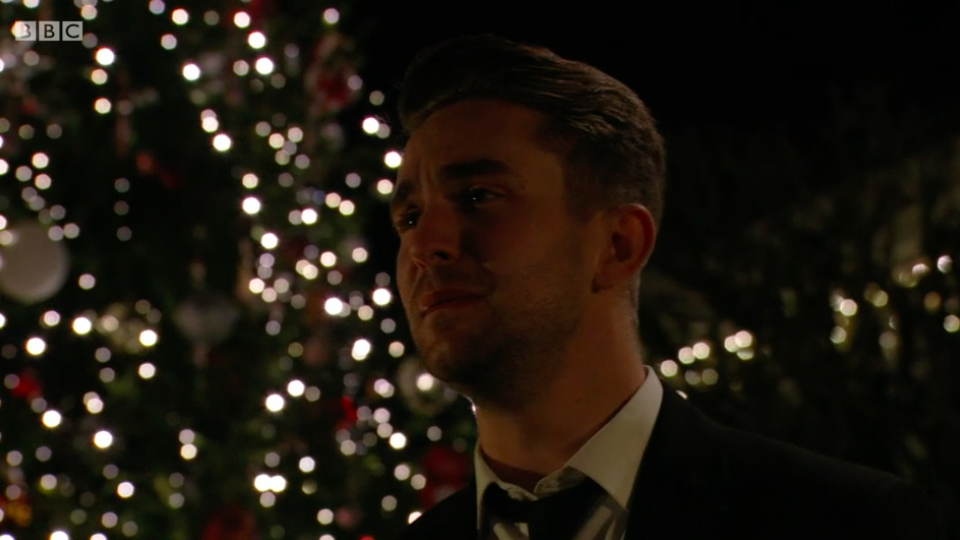 Callum was as heartbroken as viewers (Credit: BBC)

After discovering Ben was involved in Jack Branning's torture ordeal, Callum begged Ben to tell him the truth about what had gone on, but Ben refused.

Even when Callum told Ben he loved him, it seemed to have the opposite effect.

Read more: EastEnders fans fear Jean Slater will die soon as she makes comment about 'the beginning of the end'

It left viewers in tears, declaring Christmas is cancelled because of the devastating split.

One said: "I'm literally crying. Why, Ben? Why do this to me? To all of us ? #BALLUM WILL RISE AGAIN I SWEAR #Eastenders."

A third said: "If anyone needs me. I'll be in my room. Curled up in a foetal position, rocking backwards and forwards, until they get back together #eastenders #ballum."

A fourth said: "Nobody talk to me. I am going to sit here and weep into a box of tissues until Ben admits he loves Callum and they make up. Christmas is CANCELLED! #Ballum #Eastenders."

All hope is not lost for fans, as actor Max Bowden told journalists at the EastEnders Christmas press launch that Ballum may not be over.

He said: "I hope so! As I said, the most fundamental thing in Ben's life is to get to that level playing field with Phil.

"Ben can't go straight, it's in his nature – as much as he may try, it's embedded.

"It's about acceptance of who he is. I'd like to see them get back together – we'll have to wait to see."

Do you want Ballum back together? Leave us a comment on our Facebook page @EntertainmentDailyFix and let us know what you think!