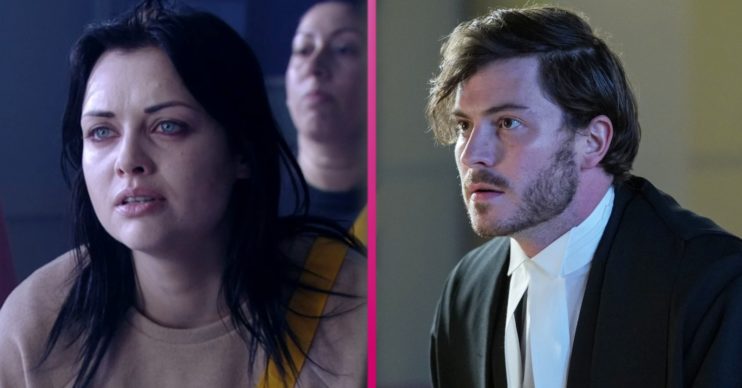 EastEnders fans were furious as Gray had an outburst at Whitney’s trial in last night’s episode (Thursday, October 8).

In the visit to Walford, it was both the day of Chantelle’s funeral and Whitney’s trial.

In the morning, Gray was paid a visit by one of the officers dealing with Chantelle’s death. He was told her death was ruled as an accident.

Later, as he prepared to go to the funeral, Gray struggled when saw Chantelle’s coffin arrive. He soon jumped in a taxi and demanded to be taken to the court.

However as he listened to the details of what happened between Leo and Whitney, it was clear he was distracted.

EastEnders: What happened with Gray’s outburst in court?

During the court scenes, Gray kept having outbursts and interrupting the prosecutor.

The prosecutor said: “A person responsible for a veritable Valentine’s Day massacre in their own home. Someone who callously left their victim to die, bleeding out on the kitchen floor and as the life ebbed away, they simply closed the door and walked away.

However it became obvious Gray was thinking about what happened when Chantelle died and he stood up saying: “No it wasn’t like that.”

Gray was ordered to sit down, but the outbursts continued.

When the prosecutor spoke about how Whitney left Leo and didn’t call the emergency services, Gray stood up once again yelling: “How much are they paying you to defend that evil monster?”

As Gray was escorted out of the courtroom he said: “This isn’t justice, it’s a joke. Tell him Whitney, if you have the chance you’d do it again wouldn’t you? Leo King didn’t deserve to live.”

Fans were furious with Gray for potentially messing things up for Whitney.

Has Gray made things worse for Whitney 😔🙈 #EastEnders

Okay. Thanks Gray. For ruining another woman's life. #EastEnders

I hate that gray fella so much #EastEnders

Has Gray completely messed up the trial for Whitney? Will she be able to convince the court she acted in self-defence?