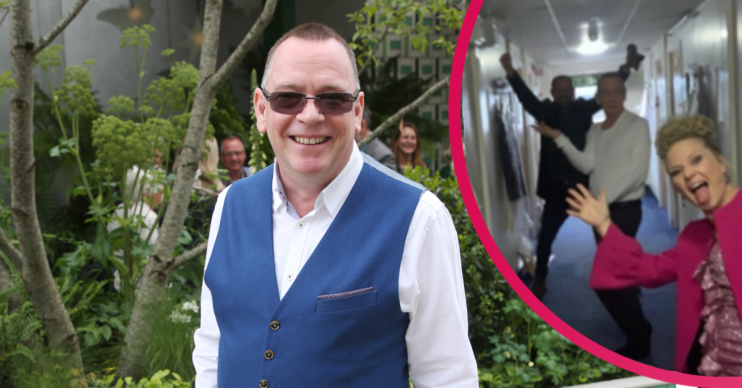 The soap actor lost a LOT of weight in lockdown

EastEnders legend Adam Woodyatt has showed off his new slim figure after losing weight during lockdown.

The Ian Beale star, 52, flaunted his weight loss in a behind-the-scenes snap from the BBC One soap.

The shot, which was shared by co-star Luisa Bradshaw-White, showed Adam posing alongside Danny Dyer and Kellie Bright.

Read more: EastEnders star John Altman on fancying Gillian Taylforth and wishing the door had been left open for his return

The soap veteran looked completely different as he stood in the corridor of the London set.

Adam could be seen standing in front of Danny, who energetically pumped his fists in the air.

How has Adam Woodyatt lost weight?

Adam took to his Instagram Story last month to credit his co-star Jake Wood for helping him.

Addressing his 40.1k followers, he said: “Like my mate Mr Wood says, ‘You’ve got to get out there. You got to do it. He goes running and I go cycling.'”

The co-stars are often spotted cycling together.

Sharing a snap of the two on a bike ride, Adam wrote: “If you go into the woods today. Lunchtime ride with @mrjakewood and his son.”

Adam’s weight loss comes after he admitted he received a cruel comment about his figure.

He told Daily Mirror Newspaper: “One of the best examples of somebody being rude is when we were at the BBC Good Food show.

Read more: EastEnders: Suki branded ‘pure evil’ as she sets up Jags for his brother’s crimes

“This woman looks at me and says, ‘You’re fatter than you are on telly.'”

The BBC star also previously explained his weight loss began as he trained for the London Marathon, having first competed in the race in 2017.

Last year, Adam and some of his EastEnders co-stars, including Jake, Natalie Cassidy and Emma Barton, ran the marathon to raise money for charities Alzheimer’s Research UK and Alzheimer’s Society.

While preparing for the race, Adam changed up his eating habits and opted for a “no-carb diet”.