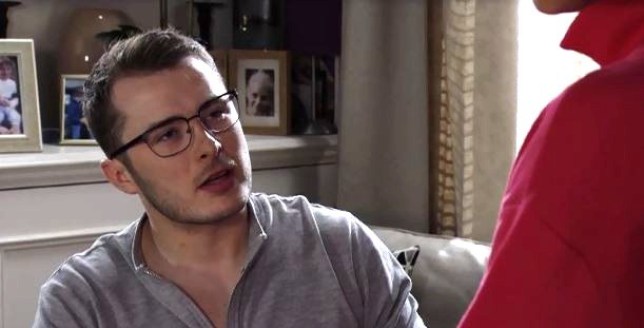 But who is he?

Ben Mitchell has a new man… But who is he? And are we ever going to meet him?

Some EastEnders viewers were shocked last night (May 7), when new villain Ben was seen exchanging saucy text messages with a mystery man.

Read more: EastEnders SPOILER: Kat and Kush get it on!

And while some were outraged by the graphic nature of the WhatsApp messages, which were shown pre-watershed, others were just dying to know who the fella was!

Read more: EastEnders SPOILER: Romance on the cards for Denise and Jack

Viewers then saw Ben reply while having breakfast with his daughter.

He typed: “Problem at home I gotta sort out first.”

Ben also finished with an emoji – the aubergine emoji. Ahem, use your imagination.

One viewer wrote: “OMG did Ben actually send the aubergine emoji on #EastEnders?!”

Another said: “Did NuBen really just use the aubergine emoji? #EastEnders.”

When one disbelieving viewer wrote: “I find Ben’s whole family situation strange. Pretending to be in cahoots with Lexi, whilst sending aubergine emojis. Who is he kidding? #EastEnders.”

One answered: “I find it rather uncomfortable viewing when a child is involved.”

“Do we really need to see Ben’s dirty text messages?” asked another.

Do we really need to see Ben’s dirty text messages? 🤮and it was pretty hilarious him putting the 🍆 emoji… yeah right, Ben! 😂😂😂 🙄in your dreams! 🍤 #EastEnders

Did NuBen really just use the aubergine emoji? #EastEnders 😩

I find Ben's whole family situation strange. Pretending to be in cahoots with Lexi, whilst sending aubergine emojis. Who is he kidding? #EastEnders

I find it rather uncomfortable viewing when a child is involved

Others were just curious about who Ben could be romantically entangled with, with one theorising: “#EastEnders revealed Ben has a secret boyfriend. I bet it’s someone on the show already.”

Another said: “I think Ben’s having an affair with Chantelle’s boyfriend, Gray #EastEnders.”

A third asked: “Could Ben’s mystery man be someone we thought was dead? #EastEnders.”

Others believe his lover is “the person controlling him”, while some suggested Johnny Carter or Luke Browning back from the dead!

Will Ben’s lover be instrumental in bringing down Phil Mitchell? Or is it just a harmless fling? All will be revealed!

Executive Producer Kate Oates recently explained that Ben would be more confident in his sexuality on his return.

She said: “What we bring back is a Ben who is a lot more confident and comfortable with his sexuality. […] We might well see Ben with a love interest – I think it will be interesting to see how this new Ben following his recent growth away from Walford would cope in a relationship.

“However, it won’t be a case that he will be defined by the relationship by any means. Ben is a complex character with many connections to explore but yes, we might be seeing some romance before long.”

Are you warming to the new Ben Mitchell?  Leave us a comment on our Facebook page @EntertainmentDailyFix and let us know what you think!