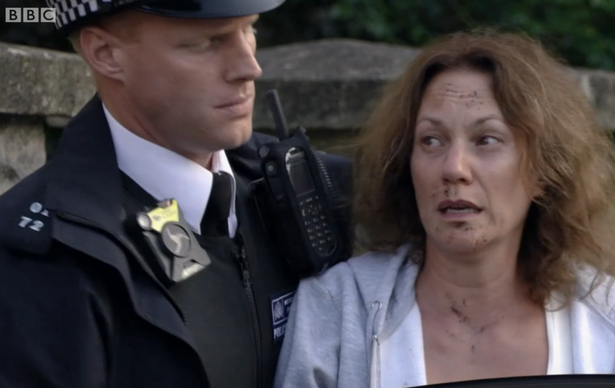 EastEnders fans call out continuity error as Rainie is arrested

On Tuesday night (October 15), drug-addict Rainie spiralled more and more out of control in distressing scenes that left viewers fearing the worst for baby Abi.

Rainie, suffering terrible withdrawal symptoms, took Abi to the park – but made a dangerous mistake when she was approached by a dealer selling drugs.

Stupidly, Rainie agreed to buy some pills and was about to take them when boyfriend Stuart turned up and was horrified by what he saw.

After a scuffle with Stuart, Rainie dropped the drugs in an allotment.

Viewers saw Rainie digging through the soil in a desperate attempt to find the pills.

By the end of the scene, Rainie’s face and top were covered in mud…

However, just moments later, Rainie arrived at Kathy Beale’s in a rage – and her face was perfectly clean and her top was white as snow.

Even one of baby Abi’s wet wipes couldn’t have scrubbed her up so nicely!

Eagle-eyed fans were quick to spot the continuity error, as just minutes later, Rainie was arrested for punching Kathy in the face – and the mud was back again!

One tweeted: “Did Rainie rinse her top with Daz on her way back from crawling in the mud?”

Another said: “EastEnders, how come Rainie’s mud on her face had gone when she hit Kathy, but amazingly returned when arrested? Continuity amiss.”

#Eastenders how come Rainie’s mud on her face had gone when she hit Kathy but amazingly returned when arrested???? 😂 continuity amiss 🧐

The muddy face is back 🤣🤣🤣 #eastenders

Did Raine rinse her top with Daz on her way back from crawling in the mud? #eastenders pic.twitter.com/Chww41wsQu

Her face is loppy but her top is spotless 🤦🏽‍♀️

“Rainie had a muddy face. Where’s the muck gone?” asked one more.

Many others applauded actress Tanya Franks for her portrayal of Rainie, with one writing: “Fantastic episode tonight and powerful performance from Tanya Franks. #EastEnders.”

As Rainie told Stuart the best thing he could do was “to let her go”, viewers who love the couple demanded they get a shot at happiness.