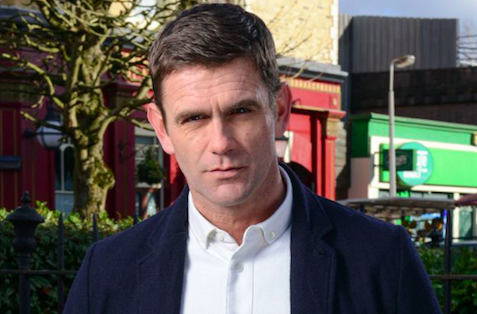 Fans have threatened to 'riot' if Jack gets shot

EastEnders fans are ready to “riot” if Hunter Owen succeeds in getting revenge on Jack Branning by killing him.

Despite claiming the storyline is “ludicrous” and “garbage” and being desperate for it to be over, they do not want Jack’s death to be the way it ends.

Spoilers tell us that next week’s EastEnders sees Mel Owen desperately trying to get fugitive son Hunter out of Walford before the police catch up with him.

But instead of planning his escape, Hunter is more interested in settling a score with Jack…

Read more: EastEnders fans divided over Bailey as some accuse her of being a ‘spoiled brat’

But, just as she is about to drive out of the Square with Hunter in the boot of the car, she’s stopped in her tracks by the shock arrival of Lisa Fowler!

We know that Hunter tracks Jack down to The Queen Vic, and his plot to exact revenge on Jack for handing him over to the police seems to come true as a gunshot echoes across the pub – killing at least one resident.

Fearful that Hunter succeeds in shooting fan fave Jack, some viewers have expressed their fury at the possible storyline.

One tweeted: “I swear if Hunter shoots Jack then that’s the final straw.”

Another agreed, writing: “If Hunter shoots Jack, I will riot.”

A third added: “I’m not watching if Hunter kills Jack.”

“If Hunter is successful with his revenge on Jack, I’m NOT going to be pleased lads let me tell you,” seethed another.

Others have slammed the plot altogether and have described it as a “total turn off”.

Writing on Digital Spy Forums, one fed up viewer wrote: “Anyone finding the Mel/Hunter stuff a total turn-off?

“I’ve been enjoying EastEnders again since tuning back in about four months ago, but this Mel/Hunter stuff has ruined it. It’s garbage in my opinion and I just don’t care.”

Another agreed, replying: “I agree, it’s a terrible storyline and a waste of the Mel Owen character.”

“It’s terrible and the upcoming hostage situation sounds ridiculous,” added a third, while one more said: “I’m afraid I blank them out. Ludicrous story… For a start, the police would be watching Mel around the clock. It doesn’t help that the actor playing Hunter is very hit and miss and I don’t give a jot about the character.”

Others blasted the plot as “turgid nonsense” and “dreadful”, and one added: “Hunter is a rubbish character played by a weak actor.

“Mel is completely unrecognisable from her previous stint and is now a stuck-up mardy cow who nobody likes. I couldn’t care less about either of them.”

Some were keen to see Hunter get his comeuppance, while some praised Tamzin Outhwaite’s portrayal of Mel.

One wrote: “I’m enjoying it. Tamzin has delivered some excellent performances as a result and I can’t wait to see what next week brings.”

Another optimistic viewer added: “Hunter and Mel’s return hasn’t been the best, but this is a good exit story for them and next week sounds amazing.”

Actress Tamzin announced she was leaving the BBC soap earlier this year, so could SHE be the accidental victim of Hunter’s frenzied attack?

Are you enjoying the Hunter/Mel storyline? Leave us a comment on our Facebook page @EntertainmentDailyFix and let us know what you think!