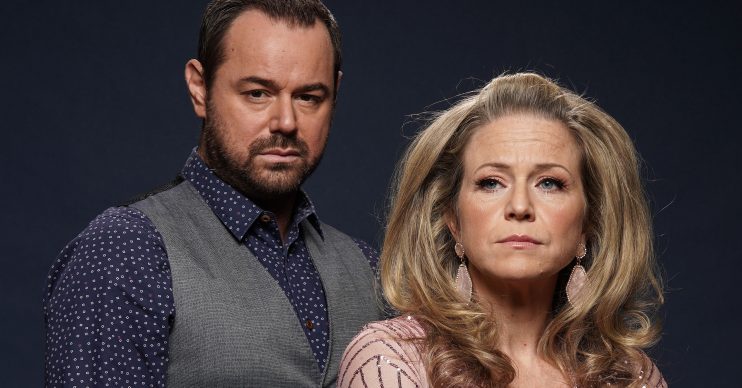 Is it all over for Walford's strongest couple?

Kate Oates, EastEnders boss, looks to have confirmed a shock split for Mick and Linda Carter.

Linda has descended into a tragic alcohol dependency that has seen her push away her friends and family, humiliate herself and choose booze over her own kids.

And now speaking out about where the storyline is going to go, Kate seems to have dropped a huge hint that the pair will soon split over it.

She told journalists at the EastEnders Christmas launch that the storyline of the Queen Vic landlords will be a homage to Den and Angie’s doomed relationship.

Longtime viewers will remember Angie was an alcoholic who lived in the pub before being kicked out by Den when he demanded a divorce on Christmas Day.

Kate said: “It’s a bit of a homage really to Den and Angie, there’s been a classic tradition of drinking in toxic relationships within that pub but the cast are very different because, fundamentally, Mick adores his wife.

“What we are going to see is ultimately how addiction gets in the way of their relationship in a way that Linda is choosing alcohol above her family. That’s going to have huge ramifications in terms of, can they stay together, will they be able to co-parent Ollie, is this going to break them up permanently?”

However, with the Carters being a much stronger couple than Sharon’s parents, it doesn’t seem like it would be a permanent split.

And Kate offered hope that Linda will come out the other side stronger.

Read more: EastEnders fans fear Jean Slater will die soon as she makes comment about ‘the beginning of the end’

The EastEnders boss said the character has “had a lot to deal with”, adding: “Mick went to prison, she has all the hangovers from what happened with Dean, Ollie has this new diagnosis that she doesn’t quite know how to deal with.”

Let’s just hope nothing at Christmas happens to push Linda over the edge for good!

Do you think Mick and Linda can find a way back from her alcoholism hell? Leave us a comment on our Facebook page @EntertainmentDailyFix and let us know what you think!