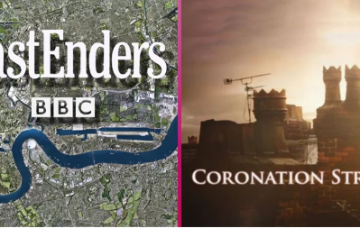 Both soaps have changed from their usual time slots

Soaps fans beware: if you tune in to your favourite show tonight at the usual time, you might find you’ve missed it!

In an unusual shake-up of the schedules, both EastEnders AND Coronation Street are airing at different times.

The BBC soap, which focuses on Habiba and Iqra taking over uncle Masood’s business, will air half an hour later than usual to avoid a conflict with its ITV rival.

If you tune in at 8.30pm, you’ll see Bernadette’s online date end in embarrassment…

The BBC soap tweeted: “#EastEnders is on at the slightly later time of 8.30pm on @BBCOne tonight.”

#EastEnders is on at the slightly later time of 8.30pm on @BBCOne tonight. pic.twitter.com/4SwAEaa7pi

Meanwhile, Coronation Street will start at its usual time of 7.30pm but, instead of finishing at 8pm in time for fans to turn over for Easties, it will continue until 8.30pm in a double bill.

Corrie gave a “public announcement klaxon” on their Twitter page to reveal the changes.

Emmerdale will remain at 7pm.

After a flurry of concern from avid soapies, they were eventually put at ease when they realised the soaps have avoided a clash.

The reason Corrie won’t have its usual gap is to make way for a two-hour long special of ITV detective series Vera.

This will happen next week, too.

In tonight’s trip to Weatherfield, Kevin mistakenly takes cash intended for Sally’s party, while Roy Cropper’s fortunes take a turn for the worse.

Fans were generally happy with the changes, with one tweeting: “Splendid! I do enjoy a 60-minute instalment, without the ‘inconvenience’ of the half-hour break. A great way to end the week.”

Another added: “An hour long episode next week as well we’re being spoilt.”

Do you get annoyed when the scheduled are messed with? Leave us a comment on our Facebook page @EntertainmentDailyFix and let us know what you think!