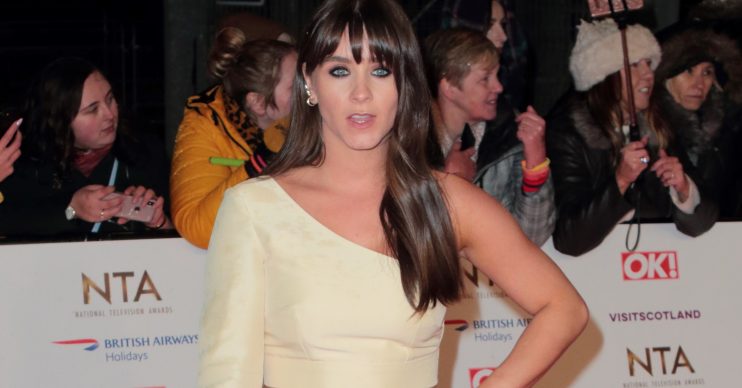 She enjoyed a spa day with her pals

Brooke Vincent has showed off her blossoming baby bump in a vibrant pink swimsuit.

The Coronation Street actress took to Instagram on Wednesday to share two photos of herself in the swimsuit as she showed fans the reality behind her Instagram pictures.

The first photo showed Brooke cradling her bump as she looked down at it while the second saw the actress bursting into laughter with her hands on her face.

Instagram Vs Reality 😩🤣 I’ve had the best time with my girls at The Radisson Spa today for my friends birthday! My antenatal massage was my first and just AMAZING! After a week of sneezing and coughing it was just what the doctor ordered 🤧 The best bit? I didn’t have to breathe in once 🤣😂💛 Thank You @radissonbluedwardian for making it extra special for my friends🌻Until next time ✨

The post was captioned: “Instagram Vs Reality. I’ve had the best time with my girls at The Radisson Spa today for my friends birthday!

“My antenatal massage was my first and just AMAZING! After a week of sneezing and coughing it was just what the doctor ordered.”

She added: “The best bit? I didn’t have to breathe in once. Thank Yo@radissonbluedwardian for making it extra special for my friends. Until next time.”

A bunch of Brooke’s celebrity pals commented on the post, gushing over the star and her bump.

Brooke’s former soap co-star Michelle Keegan said: “There she is…” while her husband Mark Wright commented a string of heart emojis.

Another fan said: “Go on girl!” while one added: “Love this @brookelevivincent, so true!”

A third wrote: “You look amazing! Thanks for keeping it real.”

The star is expecting her first child with her boyfriend Kean Bryan.

Last month, Brooke – who plays Sophie Webster in the ITV soap – told OK! Magazine she was “beside” herself with “happiness” about becoming a mum for the first time.

She added: “I always worried it wouldn’t happen for me.

Speaking about herself and Kean, Brooke said: “We’re both each other’s biggest fans and having a baby together will add an extra bond. Kean brings out the best in me and it makes me so excited that we’re on this journey together.”

Last month, Brooke asked her fans for advice after she didn’t realise how “rubbish” maternity clothes are until she fell pregnant.

She wrote on Twitter: “Things you don’t realise before you’re pregnant. 1. How rubbish maternity clothing is.”

Things you don’t realise before you’re pregnant. 1. How rubbish maternity clothing is. 🙃