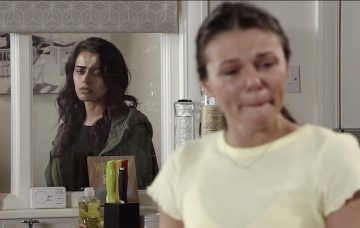 Bhavna Limbachia decided her Coronation Street character Rana Habeeb should be killed off.

The 34-year-old actress bowed out of the ITV soap last night (20.03.19) when her alter-ego tragically died after the Underworld factory roof collapsed on top of her on her wedding day, leaving her significant other Kate Connor (Faye Brookes) distraught.

But Bhavna admits she thought the only way the couple – who held their own impromptu wedding ceremony together as she lay dying on the debris-ridden factory floor – could be separated was for Rana to be killed.

She said: “When I told Kate Oates and Iain McLeod that I wanted to leave the show to try other things, it was my decision and my choice for Rana to die because it was the only fitting end to the character.

“Kate and Rana had fought so hard to be together and they had been through thick and thin together.

“I believe their love was so pure as two souls that there was no way that Rana was just going to have a change of heart, hop in a cab and leave.

“I felt that if they were to be separated, they had to be torn apart and it couldn’t have been their decision. The only way to go was if Rana were to die. Rana would never leave Kate, ever.”

Despite the hard-hitting scenes, some of which took up to 10 hours to film, Bhavna tried to remain in character when she got home after filming.

She added: “It was difficult because I never tried to snap out of character when I got home.

“It was finding a balance of being able to detach yourself emotionally from the scenes but almost stay in that frame of mind to go back the next day and film.”

Kate and Rana’s relationship captured the hearts of the nation and was dubbed ‘Kana’ by Corrie super-fans – and Bhavna admits learning about the LGBTQ+ community during the plot has “changed” her as a person.

Bhavna mentioned that she is “proud to be an ally for the LGBTQ+ community.”

“It wasn’t something that I knew enough about so when I was approached with this storyline, I felt it was important to educate myself about the LGBTQ+ community and that has changed me as a person.”