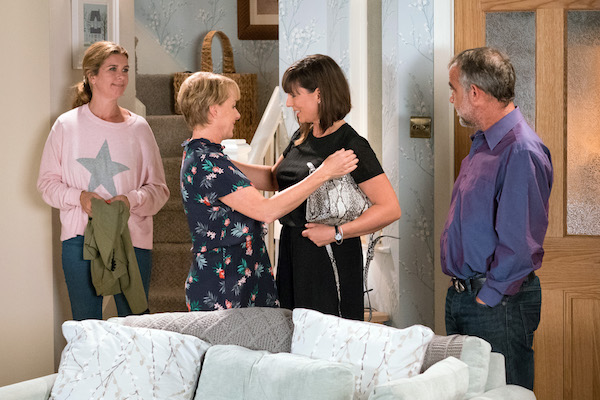 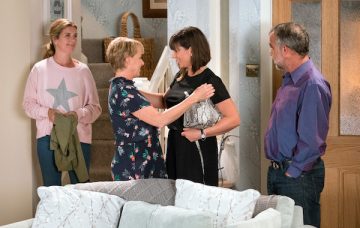 Sally decides to set Kevin up with Paula, not realising that Paula has her eye on someone else

With all the fraud stuff going on in Sally’s life, it’s surprising that she can find the time to matchmake her ex-husband Kevin.

But that’s exactly what she does when she starts having suspicions that her newly-single sister Gina has got her sights set on Kev.

Wanting to nip Gina’s crush in the bud sharpish, Sally organises a dinner party where she plans to set Kevin up with her solicitor friend Paula Cunliffe.

But Sally’s way off the mark as Paula only has eyes for daughter Sophie and Gina is more interested in Sally’s husband Tim!

Gina split with her lover Dev Alahan last week when he told her he was ashamed of her and didn’t want her attending his posh golf dinner with him.

Heartbroken Gina moved in with Sally and Tim and was impressed when Tim revealed he’d collected her stuff from Dev’s and had given him a dressing down for ditching her.

Meanwhile Sally and Tim have been having their own problems since fraudster Duncan Radfield stole £40000 of charity money from the council and told police that Sally was involved.

Duncan also claimed that he and Sal had been having a sordid affair and Tim has struggled to move on from what’s been said, even though he defended Sally by attacking Duncan.

Corrie fans have already taken to Twitter to predict that Tim and Gina will have an affair.

“I think Gina and Tim will have an affair,” predicted one fan.

“I hope Tim and Gina don’t have an affair,” commented another.

“So annoyed with the stupid Sharon and Keanu affair,” raged a third. “And can tell Corrie are going to have Tim and Gina have an affair next.”

I think Gina and Tim will have an affair #coronationstreet #corrie

I hope Tim and Gina don’t have an affair 😭😭😭#coronationstreet

So annoyed with the stupid Sharon & Keanu storyline. And can tell Corrie are going to have Gina and Tim have an affair next.

It was recently revealed that Sally would be spending time in prison for fraud, despite being totally innocent.

Earlier this year, Duncan got his hands on a council grant – with help from a gullible Sally – after claiming that he was setting up a charity foundation in memory of his late wife.

But, little did Sally know, the foundation didn’t really exist and Sally only realised she’d been duped when it was already too late.

Sally and husband Tim are left furious that Barlow’s Legal Services agree to represent him.

After Sally is framed and arrested, she faces a tough battle ahead to clear her name.

While Tim tries to help, he ends up punching Duncan in an angry showdown and only makes things worse.

Eventually, Sally recruits the help of an old friend who is now a lawyer called Paula. But even that becomes a big sorry mess when she embarks on an affair with Sally’s daughter Sophie!

In shocking future scenes, Sally eventually ends up in court to face trial for fraud.

Actress Sally Dynevor, who plays Sally, recently told Metro.co.uk: “Sally will go through the criminal process – get your t’shirts ready! It is going to be quite a big story, coming up through the autumn.”

Contemplating a spell in jail for her character, she continued: “For everything to be taken away from you and locked in a room without your family and all those things is bad.

“But for Sally, the worst thing is just the shame of it, that would be horrible for Sally, the fact that everybody on Coronation Street knows she’s gone to prison.”

Viewers will remember the famous campaign in 1998 to free Deidre Barlow after she was innocently put behind bars.

Do you think Gina and Tim will have an affair? Leave us a comment on our Facebook page @EntertainmentDailyFix and let us know what you think!